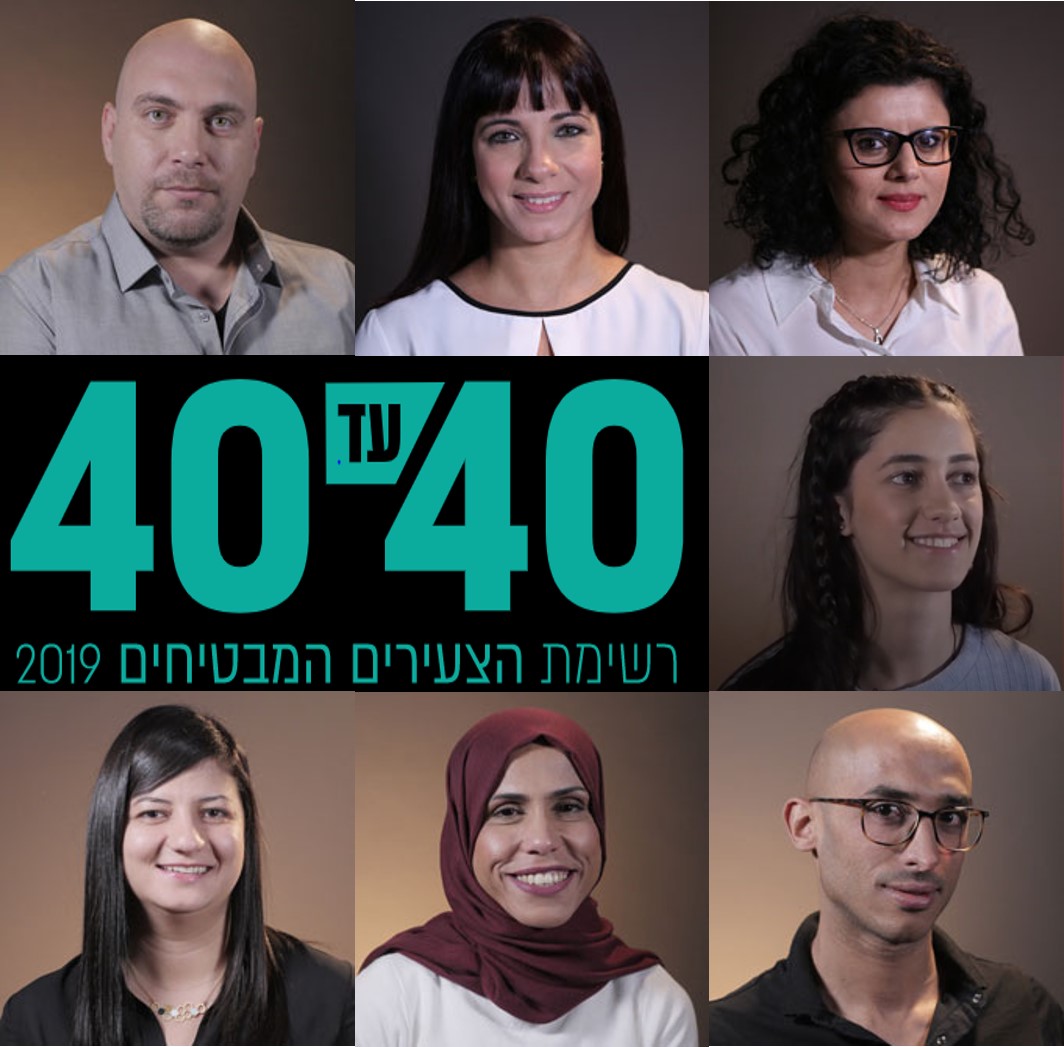 This year's annual "40 Under 40" list published by Globes Magazine includes an unprecedented number of Arab citizens from a wide variety of fields and backgrounds. There are seven Arabs included in the profiles of “Israel’s most promising young people under 40”  (full list in Hebrew).

The Arab citizens include: 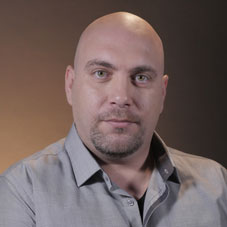 Afif Abu Much (Communication): Data Systems Engineer at DELL-EMC and political analyst for Al-Monitor. BS in Information Systems Engineering from the Technion and lives in Baqa El Gharbiya. In recent years he has promoted discourse on the inclusion of Arab society in Israeli society, media and political discourse through a variety of activities, such as Saturday Culture political events in Baqa, and social media posts such as counting the number of Arab interviewees in every Friday night news show. (Hebrew profile) 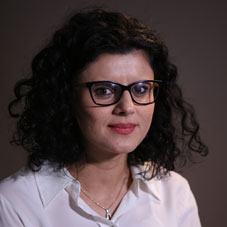 Dr. Nasreen Hadad Haj-Yahya (Social policy): Director of the Jewish-Arab Relations Program at the Israel Democracy Institute. BA in Business Management, MA in Education and Geography and Ph.D. in Philosophy from Tel Aviv University and lives in Taibeh. She is involved in a variety of research and policy projects related to socio-economic development of Arab society and integration of Arab citizens into mainstream Israeli society. Her main mission is that government and the senior civil service “will represent the diversity of Israeli society.” (Hebrew profile) 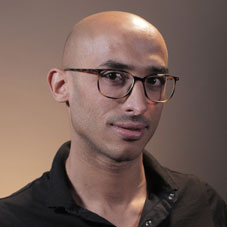 Fadi Elobra (High-tech): Founder and Co-Director of TalenTeam, for Diverse Placement of Arab University and College Graduates. Born and raised in Rahat, finished the local high school and currently lives in Jerusalem and works in Tel Aviv. A social entrepreneur who is “channeling his anger” about education gaps into developing paths to employment for Arab citizens who graduated from academic institutions but cannot find suitable employment in the Israeli labor market. (Hebrew profile) 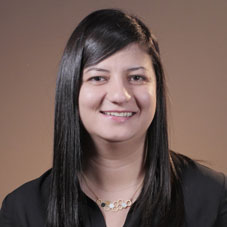 Haneen Zidan Salalha (Science and medicine): Manager in the MES project at Bio-Technology General Ltd., an integrated biopharmaceutical company located in Israel and owned by the private Swiss Company Ferring Pharmaceuticals. BS in Psychology and Biology and MS in Biology from Haifa University. Born and raised in the Druze village of Beit Jann and now divides her time between Beit Jann and the Jewish town of  Be’er Ya’akov. Responsible for managing pilots of digitization of production processes. (Hebrew profile) 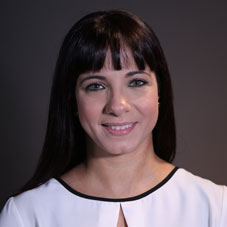 Dr. Hadile Ounallah Saad (Science and Medicine): Vice President of R&D of the medical cannabis company Cannassure Theraputics.  Born and raised in Nazareth, BS in Biology from the Technion, MS and Ph.D. from the Hebrew University of Jerusalem and now lives in Um El Fahem. She is responsible for the development of new technologies and new products in the company, which she joined in August 2018. (Hebrew profile) 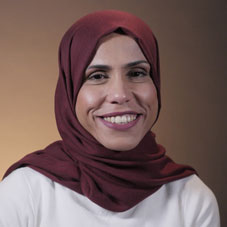 Tahrir Alzbeidi (Art): a Bedouin artist. BA in Art History and in Arabic Language and Culture from Ben Gurion University, born and raised in Arara in the Negev and now lives in the Jewish town of Arad. Her art is a combination of various materials and unlikely objects and focuses on “motherhood, Bedouin society and culture and the issue of tradition vs. art and how these two can be combined.” (Hebrew profile) 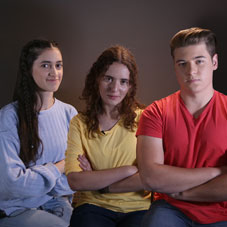 Lama Baha Ghnayem, together with two Jewish partners (Climate change protesters): Lama is 17 and attends high school in Sakhnin. She is one of the central teenage activists in Arab society about climate change and led Friday Strikes for the Climate in the Arab community. She is working on enhancing Arab society's access to relevant materials and raising awareness via community meetings and seminars because “people in our society are immersed in other struggles – on violence, education, racism – and it’s difficult to get them to pay the same amount of attention to climate change.”  (Hebrew profile). 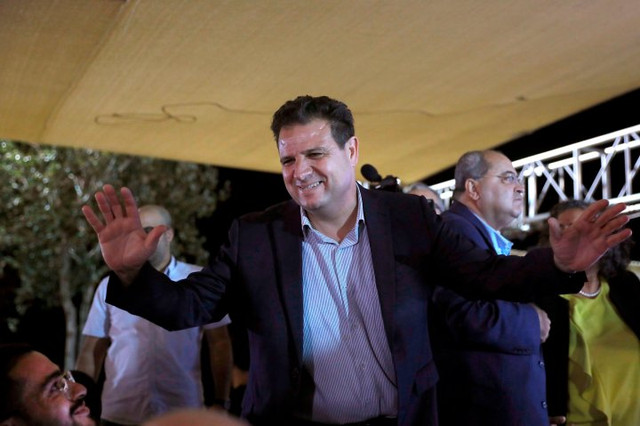 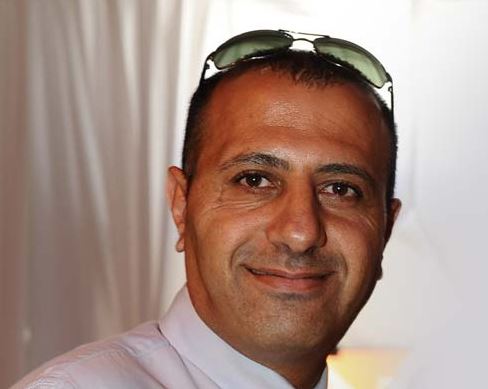 Globes Magazine named Aiman Saif, founder and former Director of the Authority for the Economic Development of the Arab Sector, to its list of “People of the Decade,” citing his work as “proof that there is still a living, breathing chance for coexistence in Israel” (Hebrew).

The Marker Magazine included three other Arab citizens on its list of “100 influential people of 2019”: 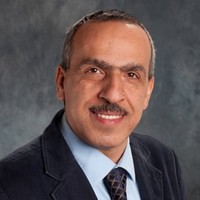 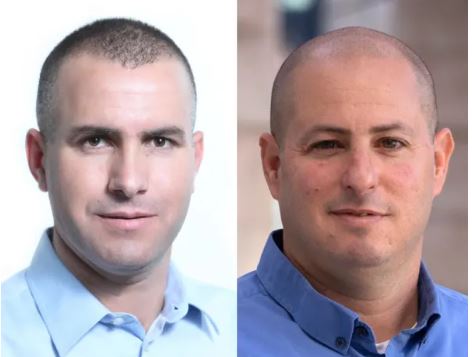 Ibrahim Nsasra, a leading Bedouin activist and businessman and visionary, together with Yariv Mann, head of the Ministry of Agriculture’s economic development efforts in Bedouin society in the Negev (Hebrew).