Arab students’ scores on the 2018 PISA test -- a periodic test given every three years by the international Organization for Economic Cooperation and Development (OECD) to 15 year-olds around the world — have dropped since the 2015 exam, making the gap in PISA scores between Jewish and Arab students in Israel the largest gap between socio-economic groups in the 79 countries that participated in the test.

The release of these PISA exam results in early December generated extensive discourse in Israel about the efficacy of recent government funding increases for the Arab school system, the pedagogical and socio-economic factors contributing to the poor performance of Arab students, and the decades of differences in funding that has resulted in a gap of three to four years between Jewish and Arab students.

Education Minister Rafi Peretz said he is establishing a working group to examine the issue, stating, “The reality that gaps have widened between students from high and low socioeconomic backgrounds is unacceptable.”

In recent years, national education budgets for Arab schools have been increased as part of efforts to close budgeting and achievement gaps between Arab and Jewish students. Though these budget increases were initiated in 2015 and were expected to take time to impact achievements, lower scores and wider gaps were not expected by Ministry of Education officials — some of whom called the results “a total surprise”— and have raised concerns of systemic problems in the Arabic school system that will require more intensive and sustained intervention.

Critics say that recent government actions are insufficient to meaningfully raise the quality of the Arab public school system, which educates 25% of Israeli students. MK Yousef Jabareen of the Joint List said that “decades of discrimination cannot be fixed with just a few million shekels." Former Meretz MK Esawi Freige acknowledged the budgeting differences but also criticized factors within Arab society that affect the quality of education, including the “nepotism” that influences the hiring of teachers in Arab schools: “Schools often turn into a tool for political payback rather than a system that ought to strive for high quality.”

Kahol Lavan leader MK Benny Gantz said that education is “the most pressing issue” to address in Israel. “The PISA survey results, which point to a decline on most indexes — and worse, to widening achievement gaps — require all of us to pause, change course, and define a nationwide program to ensure equal educational opportunity for all,” he said in a statement.

The results of the 2018 OECD’s Program for International Student Assessment Tests (PISA) showed lower scores from 2015 among Israel’s Arabic-speaking students in all three subjects, reading, mathematics, and science. A Ha’aretz editorial stated, “If you isolated Arab students’ scores from those of Jewish Israelis, they would be in last place among the 79 countries where students took the exam, in the same league with countries like Kosovo, Saudi Arabia, Indonesia and Morocco.”

In mathematics, the scores of Hebrew speakers also stayed the same at 490 but Arabic speakers scored 379, a drop of 12 points. The OECD average is 489, with Israel’s average at 463, down seven points from 2015.

In the sciences, Hebrew-speaking Israeli students remained at 491 points, while Arabic-speaking students dropped 26 points to 375. The OECD average is 489 points and Israel’s average 462, down five points since 2015.

Overall, PISA showed a gap of 144 points in reading, 111 points in mathematics, and 116 points for sciences between Hebrew and Arabic speakers. Almost no Arab students were deemed “outstanding,” and 53% failed all three subjects. Moreover, 69% of Arab students failed reading, 67% failed math, and 66% failed science. The weakest 5% of Israeli students had some of the lowest scores among the 79 participating countries. For example, the weakest Israelis scored an average of 380 in reading, lower than the 401 average for the weakest students from all countries.

A comprehensive Ministry of Finance mapping in 2015 revealed significant budgetary gaps between Jewish and Arab schools throughout the education system, according to which “socio-economically weak Jewish schools receive higher budgets than comparable Arab schools,” with a 30% budgeting gap in elementary schools, 50% in middle schools and up to 75% budgeting gaps in high schools (Hebrew).

Under GR-922 – the five-year economic development plan for Arab society – funding increases were approved as a tool to address budgeting and achievement gaps between Jewish and Arab students. The plan allocated funds for additional teaching hours in the Arab public schools as well as to enhance the skills of Arab teachers, decrease dropout rates, and promote quality education.

The main investment in recent years has been in differential budgeting – allocating more per pupil in weaker Arab schools beyond baseline funding levels to compensate for previous funding discrepancies. An annual investment of NIS 431 million has been made in this area since 2016, enabling approximately 31,000 additional teaching hours at Arab elementary and middle schools.

According to a Knesset research center report in July 2019 (Hebrew), this has led to greater investment in the weakest elementary and middle schools, but has not closed the gaps. Allocation for a Jewish elementary school student from the weakest group is still about 17% more than that for an Arab student from the same socio-economic status. 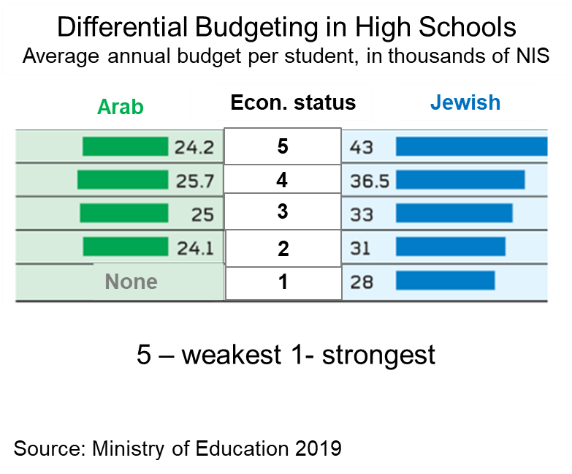 The second and much smaller area of focus has been enhanced training and support for Arab teachers, including raising the acceptance requirements for graduating Arab high school students into teaching colleges and enhancing the skills and practical experience of Arab teachers.

Arab educators and political leaders cited a number of key factors responsible for the poor PISA test results. These include, for example, the poor physical state of Arab schools, and outdated educational methods used by veteran Arab teachers that focus on memorizing information rather than the critical thinking and writing skills that are the focus of the PISA exam. As there is a surplus of Arab teachers, placement of educators is often the result of local pressure rather than merit, and experts state that “a teacher-hiring reform is needed.”

Following the release of the PISA scores, Education Minister Rafi Peretz said that he is establishing a working group to form “a comprehensive plan in order to bolster the education system in the Arab community with an emphasis on language studies, mathematics, and sciences.” The ministry said the group will examine the Arab system’s syllabus, teaching material and methods, as well as the utilization of recent government budgets.

Leading voices in Arab society are calling for greater Arab involvement in government approaches to the issue. MK Ahmed Tibi of the Joint List tweeted that the results reflect “a failure by the Education Ministry to include Arab society, which requires drawing conclusions and improvements” (Hebrew). Sharaf Hassan, chairman of the Arab Education Monitoring Committee, called on the Education Ministry to work with Arab experts to address the issue, saying education in Arab schools does not address the needs of Arab society.

The socio-economic gap between Arab and Jewish municipalities is also being discussed by political leaders and commentators as a barrier to educational parity. Arab municipalities lack the funds to supplement national education budgets, in contrast to the wealthier Jewish localities that provide such funding for their schools. Likewise, gaps exist in additional payments collected from the parents, with parents in wealthier communities providing four times as much funding for school enrichment activities than parents from the poorest communities (Hebrew).

The Taub Center for Social Policy Studies in Israel, which recently published a book titled: Educational Inequality in Israel: From Research to Policy (English abstract), also points out that only 10% of the Ministry of Education’s budget is “set aside to advance weaker population groups,” discussing numerous elements such as teacher training, investment in early childhood, class sizes and investing in schools in Israel’s periphery as affecting equal opportunity in education. The book discusses the separation of the school system in Israel into “four tribes” (Hebrew Secular, State Religious, Haredi, and Arab), leading to “schools in the Israeli education system [that] differ in the socioeconomic composition of their student bodies. These differences contribute to perpetuating intergenerational inequality because the composition of the student body has an impact on student achievements.” The researchers claim that, “Despite various attempts, it is hard to imagine much integration of these four tribes” but state they “are of the opinion that integration within the schools between students from the different tribes and different socioeconomic backgrounds should be encouraged.”

The Abraham Initiatives called on the Ministry of Education to establish “regional schools that allow Jews and Arabs to study together…Separation must be minimized as much as possible because it always leads to discrimination.”