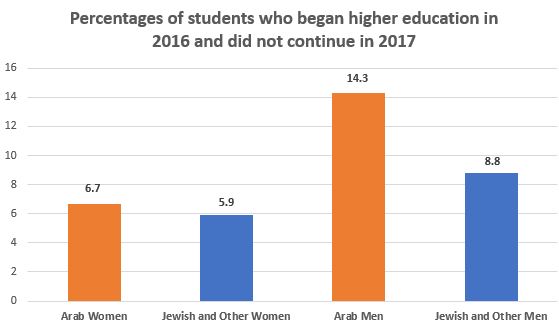 With higher education recognized as key to improving socio-economic prospects for Israel’s Arab society, a new study for the Ministry of Finance examines trends in Arab enrollment in higher education and identifies continued barriers to integration of Arab students.

The study, Barriers to the Integration of the Arab Population into the Higher Education System, was conducted by Ministry of Finance researchers Ze’ev Kril and Najeeb Amariye.[*] What follows is an English-language summary of the main findings and recommendations. 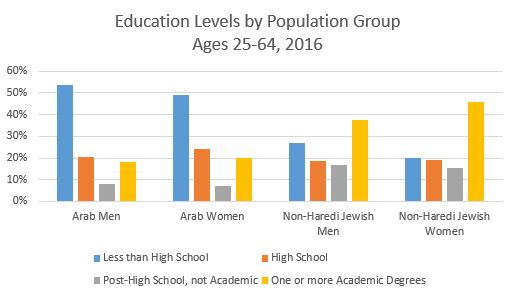 Current Rates of Education and Employment

There is a clear and strong correlation between higher education and employment – both the probability of being employed and salary level. Among Arab men with elementary to high school education levels, employment rates are 68% and 82% respectively and average monthly salaries range between NIS 6,800-8,100 (USD 2,000-2,380). These numbers rise for Arab men with a higher degree (whether vocational or academic) among whom employment rates are 91% to 92%, and average salaries are 9,500 and 12,500 (USD 2,800 and 3,680) respectively.

Gaps in higher education between Jewish and Arab society are not necessarily closing. The researchers claim that the rate of Arab students should be compared to their relative size in the relevant age groups, and not compared to their rate in the general population as is frequently done in government data. Integration of Arab students is usually measured vis-à-vis their numbers among all students compared to the 20% Arab representation in the general population, and according to the Council for Higher Education, Arab students comprised 17% of undergraduates in Israel in 2017-18. However, according to the research, Arab citizens comprise 28% of the population relevant to higher education, approximately ages 20 to 24. The research also mentions that the rising percentage of the Haredi community, which for the most part does not enroll in higher education, lowers the relative population rate of non-Haredi Jews, to which Arab society should be compared.

Likewise, gender gaps are clear when looking at those receiving a first degree (bachelor’s) in the past two decades. While the percentage of Arab women with a first degree from Israeli institutions has risen from 9.8% in the year 2000 to 23.7% in 2018, the number of Arab men holding a first degree rose from 7.6% in 2000 to only 9% in 2018. By comparison, 65% of Jewish women and 45% of Jewish men currently hold such degrees. 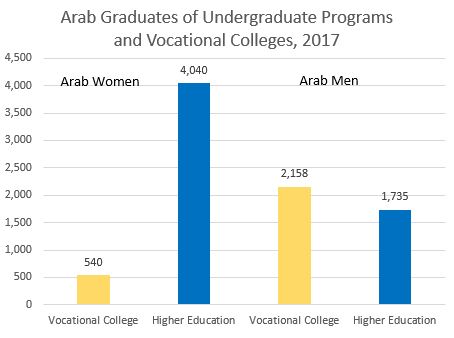 Vocational colleges are a second and critical pipeline for higher education for Arab students, and especially for Arab men. Approximately 12% of all graduates of Israeli vocational schools are Arab men and only about 3% are women, and there are more Arab men graduating vocational colleges per year than graduating with an academic first degree (2,158 and 1,735 respectively in 2017).

The research shows a gradual decline in dropout rates from higher education, in accordance with the goals of the Council for Higher Education multi-year plan. However, dropout rates are still highest for Arab men, as 14% drop out during the first year of study, compared with 6.7% of Arab women and 8.8% and 5.9% of Jewish men and women respectively.

Major Barriers to Integration and Success in Higher Education 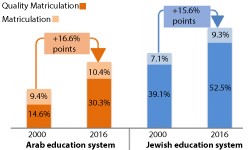 --Matriculation: While the percentage of Arab high school students eligible for a matriculation certificate has risen by 17 percentage points between the years 2000 and 2016, the number rose at the same rate in the Hebrew language education system, and so the gaps remain almost the same. Moreover, previous research by the Ministry of Finance shows that gaps begin before students take matriculation tests.

--Psychometric: This exam is perceived by many Arab students as a major barrier to integration into higher education. Although the gap is gradually narrowing between average exam scores of Jews and Arabs, it still stands at about 100 points out of a total score of 800. Gaps are especially notable in the English language chapter, which, according to the research “is another expression of the lack of success of the school system in preparing the [Arab] students for higher education.”

[*] According to the study, “the opinions in the report are currently those of the researchers and do not necessarily represent the government."