Gaps Between Jewish and Arab High School Students in Matricu...

The Chief Economist’s Office under the Ministry of Finance issues a “Weekly Economic Report” focusing on different aspects of the Israeli economy. A recent report focused on matriculation gaps between Jewish and Arab high school graduates (full report in Hebrew).

Of all the tests taken by students throughout their high school years, matriculation exams and the psychometric test most affect access to higher education, the report states, making it important to examine and address social gaps and achievements so that these test scores do not prevent Arab students from enrolling in university.

The report focuses on the size of the current gaps, and whether they can be attributed to specific stages of education. The writers examine barriers affecting gaps through 8th grade (when the Standardized Tests – MEITZAV – are taken, providing data about relative academic levels) and barriers between grades 9 and 12, leading up to the matriculation exams at the end of high school.

Determining the importance of each educational stage, elementary school through 8th grade and high school, and how barriers in each period affect achievement gaps, “could be important in formulating an informed [government] policy that aims to narrow gaps and strive for equal opportunities.”

The report concludes that despite improvements in the Arab education system, matriculation gaps remain large, with the main barriers to parity appearing during the high school years. There are especially large gaps in English-language skills, and Arab boys face more barriers than girls. 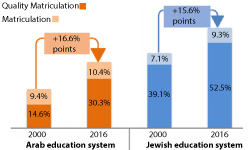 The report then compares matriculation achievements of Jewish and Arab students to their 8th grade achievements, in an effort to compare the effects on outcomes of elementary school and high school education. The research focuses on a sample of almost 20,000 students – 5,500 Arab and 14,000 non-Haredi Jews - born in 1995, who took their 8th grade MEITZAV exams in 2009 and their high school matriculation exams in 2013.

The following table summarizes these achievements and, accordingly, the chance of these students to reach high level English and Math matriculation exams:

Following are the major conclusions of the report:

[1] According to the Ministry of Education definitions, a “qualitative” matriculation diploma includes high level English and math tests (4-5 points in each), plus two major subjects, either scientific or humanistic, with a total grade average of above 80.