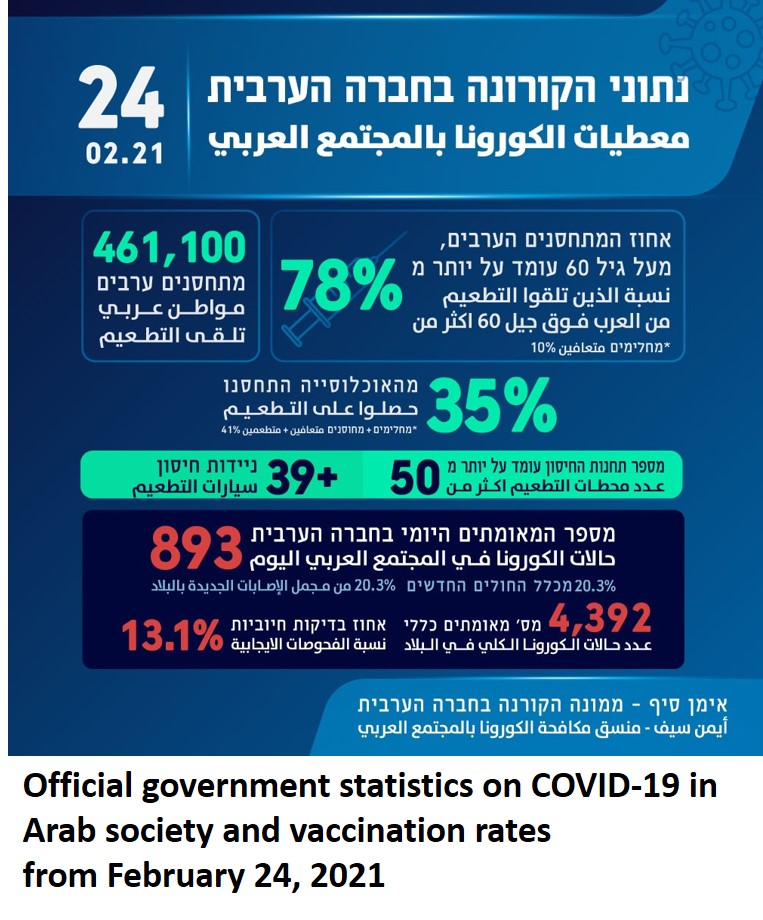 When Israel’s vaccination campaign launched, challenges reaching Arab society, particularly in Bedouin communities in the Negev, created immunization gaps between Jewish and Arab citizens. Since the previous IATF update on this issue, vaccination rates in Arab society are on the rise.

On average, the percentage of Arab citizens vaccinated is increasing and the gap in vaccination rate between Arab society and the general public continues to narrow. That said, averages mask wide disparities by region and locality, with Bedouin communities remaining hardest to reach. Efforts to overcome these challenges are ongoing.

Simultaneously, Coronavirus infections in Arab society are once again on the rise, particularly among young people who have not been vaccinated.  This concerning trend has been attributed to the British variant becoming dominant in Israel and continuing low vaccination rates among younger Arab citizens.

As of February 24th, 78% of Arab citizens over the age of 60 have been vaccinated compared to approximately 90% of the general population over 60.[1] In total, 35% of Arab citizens, or 461,000 people, have been vaccinated compared to 49% of the general population. Today, 50 vaccination stations and 39 mobile clinics are operating in Arab society.

In broader Arab society, the rising number of cases and severe cases is alarming public health experts, who warn of a “4th wave”.  At the start of March there were 4,423 new cases in Arab communities (excluding mixed cities), an increase of 500 from the preceding week. There are now 7,521 active cases in Arab society and 147 patients are in serious condition. While the Negev remains of particular concern, cases are spiking in the Galilee as well.

Most new cases are young people who have not been vaccinated. On one hand, this displays that the vaccine is working. On the other, it reflects growing consensus that the rise of the more contagious British variant and new emerging strains will be a major public health challenge and hinder the reopening of Israeli society. It reinforces the need to vaccinate younger as well as older citizens. Regarding Arab society, this reinforces the urgency of promoting immunizations for all ages.