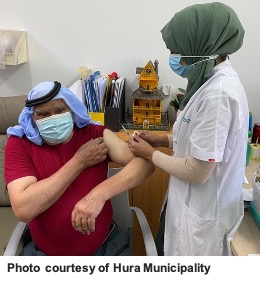 Israel is at a pivotal moment in its ongoing battle to contain COVID-19. It received global recognition for becoming the first country to vaccinate 20% of its population (now closer to 30%). Yet cases are still at record levels. Israel currently has the highest number of daily cases per capita in the world, in spite of a third tightened lockdown that began on January 7th and was just extended.

These challenges are even greater within Arab society in Israel; in addition to having among the highest numbers of cases during this third wave, Arab communities continue to have low vaccination rates. Misinformation, mistrust and accessibility issues have emerged as significant challenges to an even roll-out of the vaccine.

With the pandemic exacerbating pre-existing socio-economic disparities between Arab and Jewish society, there is great concern that vaccination gaps will mean Arab society will be left even further behind a post-Covid recovery.

Numerous government and civil society initiatives are working to promote the safety and importance of vaccination. Details on the infection rates, vaccinations and barriers below:

Though infection rates were initially low, since the second wave Arab communities have been disproportionately affected: By December 2020, Arab society constituted 45% of all positive cases in Israel—more than twice the population rate. This percentage has subsequently decreased but still over 1,000 Arab citizens are being diagnosed daily. As of mid-January, 44 out of 81 localities rated red under the traffic light system are Arab.

The main causes of high infection rates remain, as in the second wave, large events and gatherings like weddings and soccer matches, and the limited enforcement of COVID-19 regulations. Arab citizens traveling to Turkey and the West Bank is also hypothesized to be a contributing factor.

While vaccination rates are improving on average-- as of January 25 roughly 14% of Arab citizens over the age of 16 have been vaccinated (compared with 30% total) and nearly 70% of those over 60 (compared with more than 90% among Jews)--vast differences remain between urban and rural areas, strong municipalities and weak ones. The lowest rates remain among Negev Bedouin, roughly 7% as of January 10th, by far Israel's poorest population.

In Israel as a whole and Arab communities specifically, average data however is only somewhat telling. On the Ministry of Health’s Corona dashboard showing vaccinations by community, most Arab communities are at the very bottom of the scale and are by far the majority. For example, in primarily Bedouin Neve Midbar and El Kasoum Regional Councils, 300 people among tens of thousands are vaccinated while in the neighboring Jewish communities of Omer, Meitar and Lehavim, over 50% are vaccinated.

Lower vaccination rates in Arab communities are attributed to rampant misinformation as well as barriers to access:

Misinformation
Many Arab citizens are reluctant to get vaccinated due to lack of familiarity with vaccine development, rumors and conspiracy theories, as well as a generalized lack of trust in the national government. Dr. Bishara Basharat, an expert on Arab public health, shared, “To be honest, I didn’t expect this. There’s a lot of propaganda against the vaccine, lots of rumors on social media.” Community leaders observed that young people see “fake news” on social media and then discourage older relatives from getting vaccinated.

One common and damaging rumor is that the vaccine is a form of birth control in order to reduce the Arab population; some believe that Arab doctors arguing against such rumors have been given bribes. Riad Daka, the mayor of Baka al-Garbiyeh, believes that trust among Arab citizens is low due to the government’s inability to curb escalating violence in Arab society, causing people to have faith in the government’s goodwill. This creates a vicious cycle as the economic crisis created by the pandemic is the primary driver of the uptick in organized crime in Arab communities [link to our piece].

Accessibility
Longstanding public health gaps have also made Israel’s vaccination campaign less accessible to Arab citizens. According to the Galilee Society, an Arab public health NGO, 80% of Arab citizens receive their healthcare through the Clalit HMO, but it only operates 4 permanent vaccination sites in Arab society. Scheduling and information about pop-up vaccination centers are mostly online. For the 60+ age group in Arab society in particular, this presents a digital barrier. 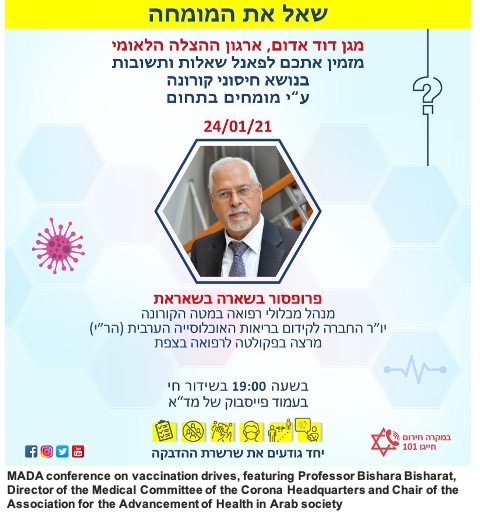 Ayman Saif, the head of COVID-19 response for Arab society, explained: “We have a lot of doctors from Arab society. It's an amazing workforce that our society deeply respects and appreciates. Together with the HMOs they can appeal to our population, especially the elderly…We have recruited the clergy, to talk about it in mosques, churches, among Christians and Druze.  We are trying many methods to reach people and explain that they should be vaccinated."

The Ministry of Health recently issued a broad request for proposals related to COVID-19 response. Of the 180 proposals, more than 30 came from Arab civil society organizations and local authorities and regional councils, many seeking to promote vaccinations, prevent spread and support affected individuals and families.

Various pilots are being tested to resolve accessibility issues. For example, a MADA mobile vaccination clinic is currently underway in Bedouin society, though the effectiveness of this approach has yet to be determined.

Pre-existing socio-economic gaps in Arab society, already exacerbated by the pandemic, will continue to grow unless most Arab citizens are vaccinated in rates closer to that of the Jewish population.  Already, the economic impact of COVID-19 was felt hardest in Arab society. Employment among Arab men, already in decline, decreased from 70% in January 2020 to 49% in December 2021. Arab women’s employment decreased from 37% to 21%.

Many Arab students, particularly Negev Bedouin, have not been in school since March. A recent Israel Democracy Institute study found that 35% of Arab higher education students lacked internet infrastructure for a normal study routine compared to 12% of Jewish students. 74% of the households of Arab students took a financial hit during the crisis, compared with 43% of the households of Jewish students.

Until a plurality of Arab society is vaccinated, Arab citizens of Israel may grow more isolated from their Jewish neighbors and have fewer integration, employment, and educational opportunities.