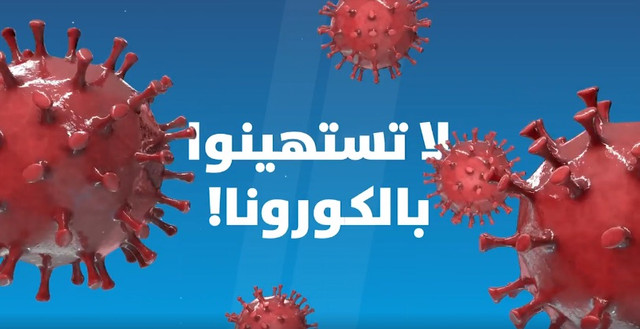 (Updated Aug. 24) After maintaining exceptionally low numbers of COVID-19 cases and related deaths in April and May 2020, a second and more intense wave of infections has been on the rise throughout Israel since June, increasing infection rates exponentially. Arab society, which had disproportionaly low numbers in the first wave, has seen rates go up by a factor of 10.

According to the government’s ‘traffic light’ intervention program, which categorizes localities as red, orange, or yellow by severity of outbreaks, as of August 24, 8 out of the 18 ‘Red’ localities in Israel are Arab (Tira, Kfar Kasem J’deide Makr, Daliat A-Carmel, Kfar Bara, Ilut, Na’ura, Uzeir) and 9 out of the 18 ‘orange’ localities are Arab.

Epidemiological Spread
Initially, the virus reached Arab communities in Israel with a few weeks delay. Despite an early lack of official guidelines and information in Arabic, by the time infections spread to Arab society there was a high level of compliance with prevention measures and effective containment of outbreaks. Thus at the end of the first wave, Arab communities response to the crisis was largely seen as a success story and Arabs comprised only 7% of all Israel’s COVID-19 cases.

Still, since Arab society’s curve was a few weeks behind that of the Jewish majority, when Israel began officially relaxing prevention measures and enforcement of social distancing, Arab communities were still quite vulnerable. Though social distancing was still recommended in Arab society, the reopening of the rest of the country created a mixed message. Coinciding with Eid El Fitr, traditionally a social time of celebration in Arab society, and a reduction in awareness campaigns in Arab society, overall compliance in Arab society weakened and the number of cases rose.

Weddings
Today, weddings are considered the largest source of infections in Arab society. In an Arabic language press release, Ayman Saif, the recently appointed head of the fight against Corona in the Arab Sector, said that “large weddings, in which the instructions of the Ministry of Health are not maintained, are one of the greatest challenges of Arab society, as they are the first source of infection.” And that he would "demand the allocation of a sufficient budget to launch a broad campaign in the Arab community that encourages a reduction of wedding and wedding-related events, and that will encourage citizens to go for Corona tests."

At a recent press conference, Prof. Ronni Gamzu, head of the national campaign against the coronavirus pandemic, noted that Arab-majority areas have been seeing a large spike in coronavirus infections. staying, “Weddings and events are being held in Arab society. Local authorities see it and feel very very unsettled, because this is creating infection cycles. I call on Arab society and leaders to act. This is a catastrophe.”

Response
The Arab Emergency Situation Room (AESR) established at the end of March to coordinate the emergency response for Arab society, has resumed limited activity. Following a public survey to gauge attitudes and perceptions about the current risks measures, the AESR launched a wide-scope awareness-raising campaign for Arab society highlighting the need for continued prevention measures. Major focus of the campaigns was to reduce socialization over the recent holiday and weddings, which have been a major source of spread, along with encouragement to wear masks and heed precautions in general.

In the Negev, which has 15% (1,679) of the total cases in Arab society as of mid-August, emergency response coordination continues as well. According to AJEEC-NISPED, the southern situation room has been turned into a Corona Task Force for the Bedouin community. This Task Force will support ongoing coordination between civil society and local authorities to provideprotective materials, needs mapping, design solutions, and resource mobilization with the local community at the center of the approach. The image above is taken from a 'Safe Weddings' video, part of a campaign at the beginning of the second wave intended to maintain awareness of the dangers.

In response to rising infection rates, Israel's cabinet approved closing cultural events, event halls, bars, and public pools earlier in the month. Prayers and religious gatherings are now limited to 20 people; restaurants can operate at a minimum capacity of 20 people inside/in closed areas and 30 people outside/in open areas; and public transportation vehicles are limited to 50% of their full capacity. On July 14, the National Security Council discussed imposing further closures and restrictions with Prime Minister Netanyahu, but no further steps were taken (Arabic).

A survey conducted by the Israel Democracy Institute analyzedpublic opinion relating to the coronavirus outbreak and the economic fallout from the pandemic following the rise in cases during the second wave. The tenth survey in a series found that both fear of infection and an economic crisis rose significantly. The increase in concern over infection rates was more pronounced in Jewish society while Arab concern remained high, but remained the same. 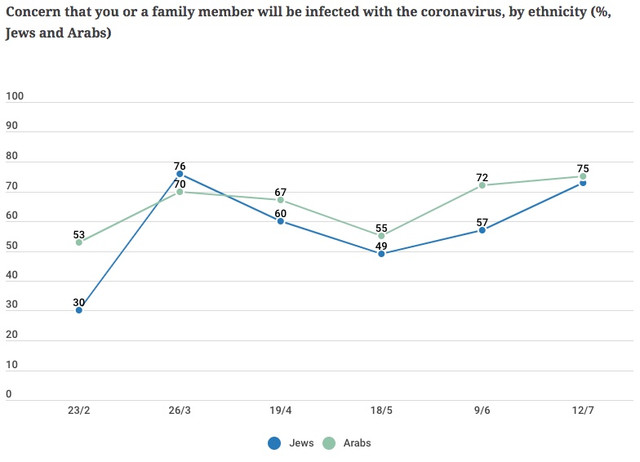 The last month has seen a significant rise in unease over the economic well-being in the future, especially among Arab respondents 76% reporting concern over economic stability versus 58% of Jewish participants. 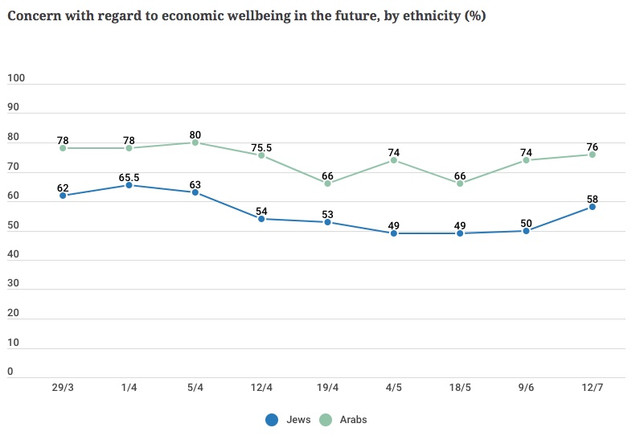