On March 12, when PM Netanyahu called for an emergency unity government in response to the Coronavirus crisis, Kahol Lavan Chair Benny Gantz agreed (Hebrew) on the condition that it is a “broad national government that includes representatives of all parts of the house”—meaning with the Arab-led Joint List.

Four days later, Gantz was given the first mandate of the March 2 elections to form a governing coalition by President Rivlin, after being recommended by the Joint List (including Balad, the most hard-line of the list’s four allied parties) and MK Avigdor Liberman’s secular nationalist (usually right-wing) party, Yisrael Beiteinu.

Whether Gantz will be able to form a minority coalition with the outside support of the Joint List or ultimately enter a unity government with PM Netanyahu (as is widely speculated) remains to be seen. But the influential role played by the Joint List towards this moment suggests how far—despite significant discord on the subject—Israel’s goalposts on Arab participation in national politics have moved over these three consecutive elections.

After the first elections of April 2019 ended in stalemate, Joint List Chair Ayman Odeh pushed one goalpost by (accurately) declaring Arab society’s desire and readiness to be part of Israel’s national decision-making circles. In this third cycle a second goalpost—the readiness of Israel’s Jewish majority for such participation—is being tested and pushed forward through political maneuvers and calculations, while and the taboo surrounding the idea is being chipped away through daily mainstream discussion and debate.

The Joint List earned 15 seats by galvanizing voters and capturing a record 88% of the Arab turnout—as well as some 20,000 Jewish votes—on the promise of being a more influential force in the Knesset. Unending gridlock may have given the party the opportunity to do just that.

In some ways, the current cycle is as much a referendum on Jewish-Arab political partnership as it is on PM Netanyahu’s political career. Party allegiances are being broken and hardline political stances changing along the axis of “anyone but Bibi” and “no government dependent on the support of the Joint List.”

During the campaign, Gantz pledged that he would not include Arab parties in a government. Avigdor Liberman has repeatedly depicted Arab politicians as illegitimate political partners and a ‘fifth column’, but has now at least momentarily joined forces with the Joint List to give Gantz key backing and “prevent a fourth election.”

In the other direction, MK Orly Levy-Abekasis (Gesher) broke her alliance with Labor and Meretz over their support of the proposed Arab-backed minority government. Likewise, at least two Kahol Lavan MKs reject this formation, making the likelihood of such a government seem tenuous indeed.

Gantz’s pursuit of an Arab-backed minority government (against the backdrop of a global pandemic!) is widely heralded for its ideological significance—a boon for Israeli democracy by the left and as a threat to its security by the right. But according to Haviv Rettig Gur, it is in fact a realpolitik acknowledgment of the Joint List’s seriousness and capacity to take part in “the hard-nosed game of Israeli coalition politics,” including a “willingness to soberly prioritize its many goals and to sacrifice less-important ones for those that matter more.”

Such pragmatism was demonstrated, for example, in the List’s united endorsement of Gantz despite the reluctance of its Balad members and many supporters. While criticism from within Arab society argued the endorsement would only be used by Kahol-Lavan to leverage better terms in a unity government with Likud, others saw this as a sign of the party’s growing discipline and cunning. According to political analyst Mohammad Darawshe, this was a first-time that majority decision-making was enforced within the list, signaling the “beginning of the reign of [Joint List head] MK Ayman Odeh, who is finally proving his leadership capacity and forcing his partners to abide to his political strategy.”

That strategy includes positioning the Joint List as the “new vanguard of the Israeli left, filling a void created by traditional parties such as Labor and Meretz as they chased an Israeli voting public that has shifted considerably to the right.” 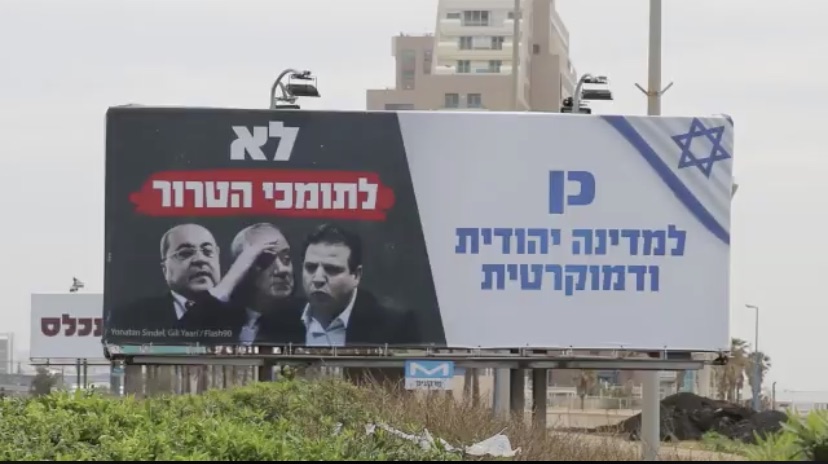 As the real and potential influence of the Joint List grows, the right wing has intensified efforts to delegitimize Arab parties and anyone to cooperating with them. When Gantz said an emergency government would need to include the Joint List, PM Netanyahu responded that “supporters of terror cannot be part of this government.” The photo, right, is of a current billboard in Haifa that depicts Benny Gantz with Ahmad Tibi and Ayman Odeh under the words: “No to supporters of terror.” Counter billboards have been posted by the grassroots organization Standing Together, stating “A Jewish-Arab majority voted: Bibi Go Home.” 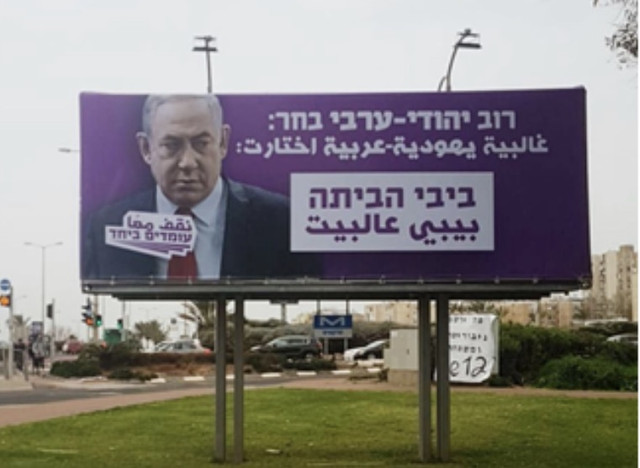 How the supposedly inept Benny Gantz found a strategic path (almost) to the top - The Times of Israel - Haviv Rettig Gur - 3.16.2020