IDI'S Conditional Partnership 2019: A Survey on Jewish-Arab Relations in Israel 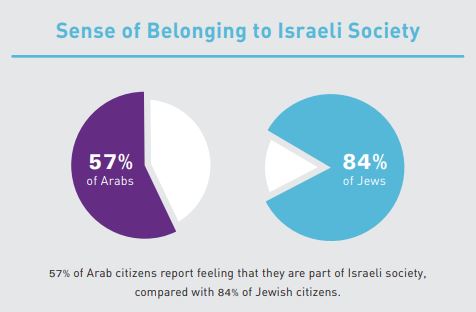 The survey and analysis, “Conditional Partnership 2019: Relations Between Jews and Arabs in Israel,” was conducted by IDI’s Guttman Center for Public Opinion and Policy Research, directed by Prof. Tamar Hermann. The IDI also produced an infographic summary of significant survey findings.

The study found that following passage of the Nation-State Law in 2018, more Arab citizens than ever before are proud to be Israeli but most do not believe that Israel should define itself as the nation-state of the Jewish people. And of significance in a year of back-to-back Knesset elections, Jewish resistance to Arab party participation in a governing coalition has dropped significantly since 2017.

The survey, which was conducted before the April 2019 national elections, interviewed 500 Jews and 536 Arabs. IDI’s summary of the survey states that the largest gaps between Jews and Arabs occurred in answers regarding state institutions, while the differences were smaller when it came to Jewish-Arab group and individual relationships.

The State and State Institutions

77% of Arab citizens deny Israel’s right to define itself as the nation-state of the Jewish people, an increase from 67% in 2017, while 54% of Jewish citizens favor denying the vote to those refusing to declare that Israel is the nation-state of the Jewish people. While 72% of Jewish respondents believe Israel is democratic in its treatment of Arab citizens, 55.5% of Arab respondents believe it is not. 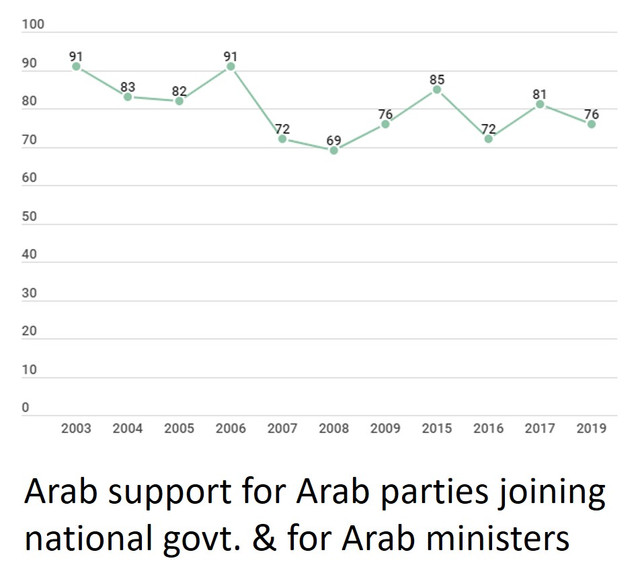 However, 76% of Arabs would support Arab parties joining a Knesset coalition and Arab MKs becoming cabinet ministers, while resistance to this among Jews has dropped from 66% in 2017 to 50% today. For the first time, a majority (58%) of Arab Israelis believe their political leadership does not adequately represent the Arab community, up considerably from 41% in 2017.

The majority of both Jews and Arabs believe that the groups do not have equal chances for success in Israel, and 75% of Arab respondents believe that a Jewish applicant has a better chance of receiving a job or being accepted to an educational framework than a more-qualified Arab applicant.

The study found that working together correlated to openness about living in the same community. The majority of Israelis, 70% of Jews and 75% of Arabs, work or have worked together, with 92.5% of Jews and 98% of Arabs defined working relationships as positive.

While 39% of Jews say the main explanation for high levels of crime and violence in Arab society is a lack of cooperation by Arab leadership with law enforcement, 38% of Arabs blame inadequate attempts by the police to prevent crime.

The current survey found that 65% of Arabs are proud to be Israeli, the highest percentage ever, and 70% believe that is possible for Arab citizens who identify as Palestinian to be loyal to the state. However, 59% of Jews believe this is not possible.