An unprecedented surge in violent crime within Arab society has prompted a week of protests and strikes in Arab communities against the rising rate of crime and violence and in demand of more effective policing in Arab communities. Arab political and civil society leaders and activists are speaking both against cultural factors within Arab society that contribute to the violence and underscoring the role of government officials with calls to recognize the issue as as a national emergency, and to work together on a comprehensive approach to restoring law and order.

The recent fatal shooting of two brothers in Majd al-Krum on October 1 brought the number of Arab citizens killed in violent altercations in the last month alone  to 13, with a total of 65 Arab citizens murdered since the beginning of 2019-- a 47% rise compared to the same period last year. According to Arab leaders and civil society experts, over 1,300 Arab citizens died since the year 2000 due to internal violence and crime, representing by average between 50-60% of all murder victims in Israel (Hebrew).

Discourse and Actions in Arab Society

On October 3, Arab citizens throughout Israel staged a general strike to protest what they say is law enforcement’s insufficient response to the increasing violent crime in Arab towns and cities, which is the top domestic concern of Arab citizens. The strike was led by the Joint List and the Higher Follow Up Committee of Arab citizens - a body representing all political parties, mayors and movements. Numerous protest events were staged throughout the week and on the day of the strike in Arab localities throughout Israel, often led by students and women (Hebrew), with the day’s largest protest staged in Majd al-Krum, drawing 15,000 people, mostly Arab citizens but also some Jewish citizens who came to show solidarity, under slogans such as “Violence is not the way,” “We choose life” and “Enough to police neglect” (Hebrew). The Joint List MKs participated, foregoing attending the swearing in of the 22d Knesset as an act of protest. Joint List Chair MK Ayman Odeh stated, “We cannot continue to bury our children while the other MKs take taking festive pictures in the [inauguration]. We will join our people in protest throughout the country (Hebrew). 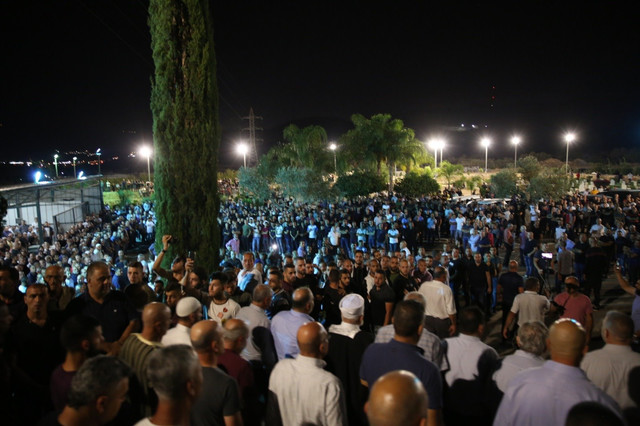 Numerous political, religious and civic leaders in Arab society expressed their anger and frustration this past week on social networks and via op-eds and interviews, lamenting the chaos, loss of lives and absence of personal security, calling on their own society to take action and show responsibility and blaming state authorities for what they say are the neglect and lack of services that led to the current crisis.

MK Ayman Odeh, Chair of the Joint List, who has been raising this issue continuously as a major concern of Arab society, wrote on Facebook that “Police don’t fight crime because of racism” and that “this justified anger must be strongly directed against the government to do what is needed immediately… We want the police to hit [criminal elements] with an iron fist and we are very clear on this.” MK Aida Touma-Sliman wrote, “We are raising our voices again crime, the criminals and the police covering for them” (Arabic and Hebrew). Numerous activists, such as Sikkuy co-director Amjed Shbita, have also referred to the wider context of poverty, a raging black market, scare resources for afterschool and enrichment activities and perceived collaboration between security services and crime families in Arab society as the underlying causes of this crisis (Hebrew).

At the same time, voices in Arab society have been increasingly calling for greater communal responsibility for addressing the “crime epidemic in Arab society,” condemning the tradition in Arab communities to avoid involving the police in disputes and instead relying on “sulha” (forgiveness) ceremonies, calling for greater education against violence and for “the majority of the people to raise their voices against the few violent elements” (Hebrew). Samah Heib-Jaljoli, director of the Riyan Employment Centers for Al-Fanar, called in a Facebook post for increased recreational resources for youth and increased police activity, but also said that “we must not legitimize despicable murderers.” Other voices in Arab society are calling to ostracize criminal elements, to refrain from shopping in stores belonging to families involved in organized crime, for lawyers to refrain from representing lawbreakers and for people not to attend weddings where shots are fired. Last week, the Islamic Council of the Palestinians in Israel, led by the conservative Islamic leader Sheikh Mash’hour Fuaz, issued a religious ruling (“Fatwa”) advocating a boycott of gun dealers and of anyone carrying a gun, calling on the Imams in all mosques to dedicate Friday’s sermon to this issue (Hebrew).

Adv. Rasul Sa’eda, an expert in police-Arab relations, urged that the police embark on a “serious and widespread operation to collect weapons found in Arab localities” as a primary measure to stanch the violence (Hebrew). The police and public security ministry are planning a drive to have Arabs turn in their guns, without penalty, in October. However, such a drive in 2017 resulted in only three guns turned in.

Over the past week, there were also coordinated protests against so-called “honor killings” of Arab women in cities throughout Israel as well as in the West Bank, Gaza, and Beirut. Shahira Shalabi, the deputy mayor of Haifa, participated in the demonstrations. “By crying out against femicide, we also aim to break the patriarchal structure of Arab society," she said.

The widespread protests and the disagreement about solutions are taking place against a backdrop of a history of tension and mistrust between the police and Arab society. The co-chairs of the Abraham Initiatives, which has published numerous reports about violence and policing in Arab communities, and has been calling for a systemic governmental plan on this issue, wrote in Ha’aretz that Arab citizens are in the position of being entitled to protection but instead are viewed by the security apparatus as a “potential threat,” called for a systemic approach that would address immediate problems as well as long-term contextual factors, and also urged Arab citizens and leaders to publicly denounce criminals and violence (Hebrew).

Minister of Public Security Gilad Erdan has taken steps to enhance community policing and security in Arab society, including the launch of a five-year government plan that includes opening of new police stations in Arab municipalities, efforts to recruit Arab men and women to the Israel police, and increased outreach on social media to Arab citizens. In July, Minister Erdan announced a government plan to target organized crime in Arab society, but at the same time that significant budget cuts will be made to the programs aimed to provide law and order in Arab localities (Hebrew).

Arab leaders and civil society experts view these recent steps as ineffective, both due to their limited scope and to what they perceive as insufficient police cooperation with local leadership and society. Many Arab citizens believe that the police treat them as an enemy rather than as residents who need a greater law enforcement presence in their communities. The Joint List conditioned its recent historic recommendation of Benny Gantz for prime minister on “resources to address violent crime plaguing Arab cities and towns,” among other demands for Arab society. However, police state that local Arab political leaders offer little cooperation in efforts to fight crime and do not want an increased police presence in their towns. 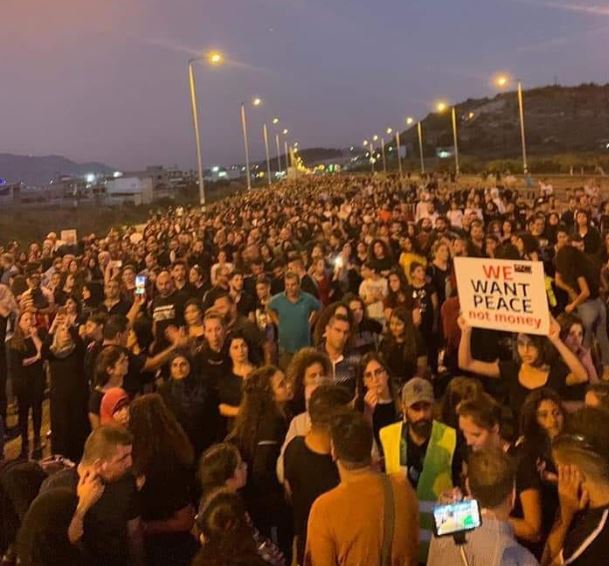 Discourse in Jewish Society and Government

As a result of the recent escalation in crime and the increasing number of murder victims, and the ongoing work of civil society organizations and activists drawing attention to this issue over the years, there are now new voices in Jewish society calling for immediate steps, framing the problem as an urgent priority that should concern all Israelis. A Jerusalem Post editorial this week stated: “Israeli Arabs are full citizens of this country, who deserve personal security as much as anyone else…the onus is on the government. It must do more to protect the Arab citizens of Israel.” Adv. Avi Himi, the head of the Israel Bar Association, is arranging for an emergency conference under the auspices of the Tel Aviv Attorney General, to which senior law enforcement officials, Arab leaders and Arab and Jewish lawyers will be invited to discuss feasible solutions. Himi also called for an emergency national plan and will meet this weekend with Arab attorneys to discuss the issue.

Minister Erdan stated this week he views the situation “as a state of emergency that should be addressed like terror” (Hebrew), calling an emergency meeting of Israel Police commanders, resulting in a plan to increase police activity in certain Arab communities and to step up intelligence to prevent crime. Minister Erdan called for a meeting with the President of the Supreme Court and the Attorney General to discuss more severe penalties “for those that break the law and cause significant violence in Arab communities.” He also called on Arab leaders to work with law enforcement and help bring about “cultural and social change.” Erdan also scheduled a meeting with the Joint List MKs to be held on Sunday, October 6.

There have been other types of responses from Jewish society. On the morning of October 4, Transportation Minister Bezalel Smotrich, an MK from the right-wing Yamina party, posted on Twitter, "We are in luck that the Arabs boycotted the opening ceremony of the 22nd Knesset. They would have shot into the air to express happiness/sadness/their protest/ because that's their habit, and then, of course, blame the police" (Hebrew). This led to a heated Twitter exchange between Smotrich and Ayman Odeh.