A recent study on the connection between traditionalism and employment among Arab women found the highest employment rate among the small number of Arab women who define themselves as secular and atheist, and the lowest employment rate among those who define themselves as religious or very religious. The study looked at other factors impacted by or correlated with levels of traditionalism, including beliefs about gender roles, traditional dress, language proficiency, family influences, and exposure to modern skills and technologies.

The survey of 1,000 Arab women from all over Israel, excluding the Golan Heights and East Jerusalem, was conducted by the Strategy and Policy Planning Department of the Ministry of Labor and Social Services. Click here to read the study in Hebrew.

While employment among Arab women in Israel has risen sharply in recent years to 40% in 2018, the rate is still one of the lowest of all demographic groups in Israel, with ramifications for Israel’s economy and social cohesion, and developments within Arab society. Due to advancements in Jewish women’s employment, gaps between Arab and Jewish women have not narrowed but grew from around 24 percentage points in 1970 to around 37 percentage points in 2017, according to this study.

The researchers state that Arab women are part of a traditional society that incorporates elements of religiosity, beliefs about gender roles, and level of exposure to modern skills and technologies, and that this culture affects their level of employment.

The researchers found that higher levels of religiosity of participants correlated to lower rates of integration into the labor market.

Traditional clothing: There are significant employment gaps that correlate to women’s beliefs about traditional or Western dress. According to the researchers, this could stem from a combination of the effect of these women’s traditional affiliation and employers’ aversion to hiring Arab women in traditional wear. Of the 85% of respondents who said Arab women should wear some form of traditional clothing, one-quarter to one-third are employed, with 40% to half of those in part-time positions. Of the 15% who supported Western dress for women, 59% are employed, with less than one-third of them in part-time positions.

Knowledge of Hebrew and English: Proficiency in these two languages, especially in English, correlate to higher employment rates.

Computer skills: The research examined the effects on Arab women’s employment of proficiency in software related to digital working environments. 50% of women who reported these skills are employed, with 35% of those part-time, while 18% of women who said they are not proficient in this software are employed, 58% of them part-time.

Husband’s support: The degree of a husband’s support for a wife’s work directly correlates to Arab women’s employment rates. According to the research, 58% of the women’s husbands ‘encouraged them’ to seek employment, and of those 47.8% are working, about one-third part-time. 26% of the women reported their husbands ‘did not encourage nor object’ to them working, and of those only 17.3% are employed with around 45% in part-time positions.  Among the 15% who reported that their husbands ‘object’ to their employment, only 4.2% are working, with 75% of this group in part-time positions.

Mother’s employment: The research found that there are higher employment rates among women who reported their mothers worked outside the home, even if for a short period of time, compared with women whose mothers have never worked – 51.8% compared to 31.9%, respectively. Most of the women in the research, 78%, reported their mothers never worked outside the home. 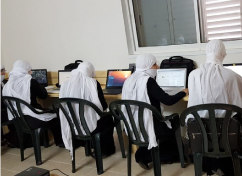