A study of the experiences of Arab teachers in secular Jewish Israeli schools concludes that they are fulfilled professionally, feel supported by their schools, believe that they are contributing to greater cross-cultural understanding, and finding increased employment opportunities.

The study, done for the American Association of Colleges for Teacher Education (AACTE), was summarized in an article in the Journal of Teacher Education entitled “Yes, We Can! Palestinian-Israeli Teachers in Jewish-Israeli Schools.” The researchers, Wurud Jayusi and Zvi Bekerman, interviewed 15 Arab educators teaching in Jewish schools and summarized scholarly literature about relevant topics such as:

In addition to the benefits of cross-cultural exposure, the researchers noted that working in Jewish schools presents an employment solution to a saturated education labor market in Israel’s Arab society. Although the Arab teachers surveyed initially started working in Jewish schools because of the lack of job opportunities in the Arab sector’s education system, they continue in these schools due to a growing sense of job satisfaction and professional and personal growth. According to the Education Ministry, the number of Arab educators in Jewish schools has risen from 465 in 2013 to 868 in 2019, out of a total of 179,000 teachers employed by Israel’s school system.

This study reinforced the conclusions of a 2018 research evaluation of the Arab Teacher Integration in Jewish Schools Program (ATI) conducted for Merchavim, the Institute for the Advancement of Shared Citizenship in Israel. Merchavim had conducted ATI for five years prior to the study, in collaboration with the Ministry of Education and the Ministry of Social Equality. Under the program, principals who hire an Arab teacher receive additional teaching hours during the employee’s first year and extra funding. Merchavim and government staff interview the teachers, assess their Hebrew proficiency and help with the hiring process.

The Merchavim evaluation states that ATI addresses several needs: Integrating qualified teachers, as Jewish schools face a shortage while many Arab educators are unemployed due to a saturated market in Arab society; integrating Arab citizens into mainstream Israeli society; and promoting shared society and mutual respect. The study found that the Arab teachers had a “clear and significant effect” on students’ opinions about Arab citizens of Israel. 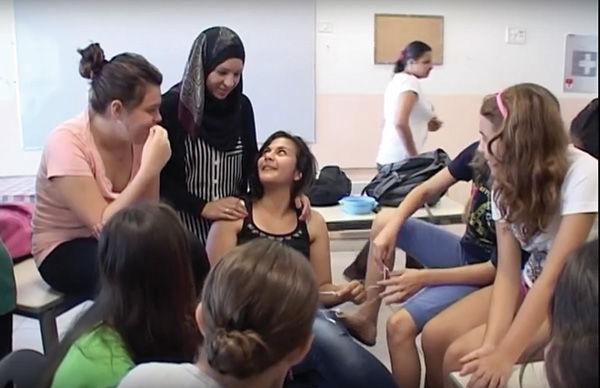 The vast majority of Jewish and Arab students in Israel are enrolled in separate education streams, with little opportunity for meaningful encounters within school frameworks. The Arab educators surveyed for the AACTE study teach Arabic and Shared Citizenship, mathematics, English, Hebrew, and one was a remedial teacher.

Participants said they believe their work helps reduce prejudice and increases mutual understanding between Israeli Jews and Arabs, despite some difficulties due to differences in culture and national identity. The literature incorporated into the research stated that Jewish children have more negative stereotypes of Arab children than do Arab children of Jews; however, the study states, “The teachers report that in general their relationships with the students are very good. It is their view that students respect and like them very much, and that they too like their students and treat them with warmth.” The teachers also reported strong relationships with the parents of their students.

Findings indicate that Arab teachers in Jewish schools experience a strong sense of self-efficacy, which the study defines as confidence in their teaching abilities that result in successful outcomes for students. The teachers said they contribute to their schools, are recognized as excellent educators, and are professionally satisfied.

The teachers said that when it comes to forming friendships with Jewish colleagues, geographic distance, rather than cultural differences, present the main obstacle to closer relationships, although some of the survey participants reported developing friendships with Jewish teachers. Politics was mentioned as a point of friction sometimes between Jewish and Arab teachers working together.

Acculturation to Jewish Israeli society was noted in the AACTE study, which described a process starting sometimes with culture shock and evolving to understanding of cultural norms and, in certain cases, acceptance and even adoption of them. The teachers believe that they have gained greater exposure to the world by working in Jewish schools, with some of the Arab teachers stating that there were aspects of the Jewish culture that they grew to like and appreciate and others that were too different from the norms of Arab society for them to embrace.

Fourteen of the 15 participants said their principals understand the complexities of their national identities, specifically when it comes to school ceremonies on Yom HaZikaron, Memorial Day for IDF soldiers. Arab society in Israel observes the Nakba on this day, commemorating when Arabs were killed or forced to leave their homes during the 1948 War for Independence. Some of the principals give the teachers who request their permission not to attend ceremonies or to be absent that day.

The researchers suggest that “stakeholders” should strengthen efforts to recruit and retain these teachers, as increasing their numbers in Jewish schools will benefit Israeli society overall “through the ripple effect.” The study also recommends that the state education system support these Arab teachers by providing preparatory workshops before and during their first year of integration, and that schools of education should consider implementing training for teaching “on the other side.” The research summary concludes by noting that the integration of Arab teachers into Jewish schools is relevant to other societies “in which the relationship between the majority and minority cultures is strained.”