In February 2019, the 2018 Diversity Index was released and presented to Israel's President Reuven Rivlin. The Index (Diversity Index: Representation and Wages in the Private Labor Market and Academia – Hebrew) is a comprehensive survey of representation and wage gaps among five underrepresented groups in Israel’s labor market: Women, Arabs, Ethiopians, Haredim and individuals age 45 and older.

The index surveys 20 major industries in the private sector employing more than one million Israelis, comprising 40% of employers in Israel. As Israeli law does not stipulate the need to ensure or even track diversity in the private sector, but only in government offices and in public bodies, the Index aims to serve "as the first step towards formulating an effective public and business policy to enhance diversity" (2016 Index, Hebrew, page 7).

This is the third time the Index has been published since it was launched in 2016 by Israel’s Equal Employment Opportunity Commission (EEOC), the Central Bureau of Statistics and Tel Aviv University's Sociology and Anthropology Department. The National Commissioner for Equal Employment Opportunities, Adv. Mariam Kabha, is the highest-ranking Arab woman in Israel's government.

Each year, parameters have been added to the Index, creating a cumulatively more robust and in-depth tool for examining the labor market: The 2016 Index included wage and representation gaps in the 20 industries surveyed; The 2017 Index added level of academic studies within the five underrepresented groups as an additional criterion; and the 2018 Index added data by gender in each group for the first time. The new Index also presents unique data on employment and salaries for professionals who hold academic degrees in five prestigious sectors of the Israeli economy, such as business management and computer science. Finally, the 2018 Index also includes the first in-depth analysis of representation and wages in the insurance industry and pension funds.

This summary presents the main findings of the Index pertaining to Arab men and women in Israel, and some of the detailed data per area surveyed.

The main findings of the Index are:

Referring to the information surveyed according to gender, EEOC Commissioner Kabha wrote, “The data that emerged from this segmentation clearly indicates the need to develop a policy of diversity and equality that relates separately to the barriers facing men and to those facing women. This is especially true among men and women with academic education entering the employment market.”

According to the EEOC, "Many claim that representation and wage gaps in the labor market stem from the differences in academic spheres chosen [by the different groups]. This Index [therefore] presents, for the first time, data regarding equal representation and wages of men and women from minority groups who hold a diploma in one of five prestigious fields." The Index surveyed a number of business sectors where graduates of five prestigious academic spheres -- business and management, economics, computer science, engineering and law – are employed in significant numbers. Major findings include: 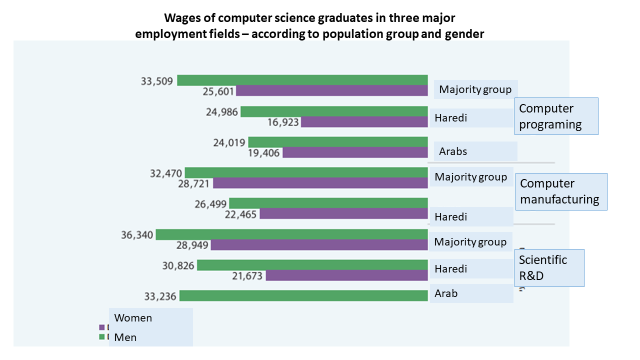 In conclusion, the Index states that while university graduates with prestigious degrees are represented equally in some fields (e.g. Arab graduates of law or of business management), they "still suffer from severe wage gaps vis-à-vis the majority group…and gender-related wage gaps within the minority group." This supports the major findings of the Index mentioned above – relatively low financial return on higher education for minority groups.

According to the EEOC, the insurance industry has been working with the Commission to enhance its diversity and wage equality policies. The current Index therefore includes "an in-depth examination of diversity and wages in this sphere, in order to create a basis for future examination of the underrepresented groups, following implementation of the new policies formulated [in cooperation with the EEOC).” The Index also states that the insurance sphere "is one of the most lucrative professions in Israel" with wages almost twice the average of the employment market.

In the insurance industry, Arab women earn the lowest salaries of any group, with their pay half of the amount earned by Arab men. Significant wage gaps in the insurance sector also exist among graduates holding the same degrees. For example, Arabs who hold degrees in Business Administration earn 40% of the average salary in the industry for employees with the same degree. Israelis of Ethiopian origin with that degree earn 50% of the industry average and Haredim 63%. The Index also states that in large organizations in the insurance industry, the employment rate of Arabs is the lowest and their wage gaps are the highest. In this sector, Arab women and men with academic degrees only earn 20 and 25% more, respectively, than Arabs without degrees.

Based on the findings, the Index recommends broad-based evaluation of the effectiveness of diversity programs in this sector: “Diversification programs in the insurance industry should examine the entry-level positions of employees of each group and the opportunities for promotion offered to them, both in terms of the formal promotion track…and in terms of further training that enables advancements later on. Diversity programs should also examine whether there are unconscious biases in the assessments of employees as a basis for staffing and promotion decisions. Many studies in psychology and sociology have found systematic and unconscious biases in employee assessment that are then reflected in the gaps in promotion opportunities and wages.”