Jasmine works to expand economic, professional and personal opportunities for all Israeli women-from all population sectors: Jewish and Arab alike; and from a variety of financial and religious backgrounds-in order to enable women in Israel to participate to the fullest extent possible in the Israeli economy. This year, Jasmine's annual summit focused on women-owned businesses as an engine for economic growth. The conference of over 500 Jewish and Arab small to mid-size business owners was addressed by Israels President Reuven Rivlin and Minister of Economy, Naftali Bennett who spoke about the integration of women into the business sector. 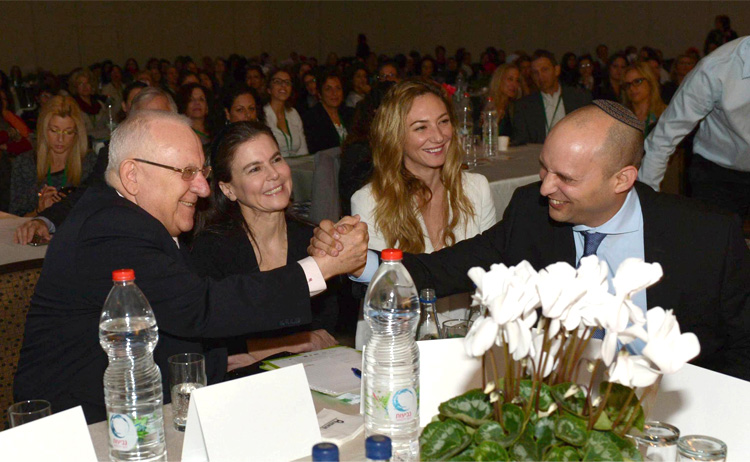 Ms. Kiram Baloum, Jasmine's Founder & CEO, opened the summit by stressing the importance of women owned businesses to Israel's economy. Israels President, Reuven Rivlin, highlighted the need for empowerment of women in Israels economy emphasizing that education must play a key role in breaking the glass ceiling. Speaking about discrimination against women in the work place, the Economy Minister Naftali Bennett asserted that It is best for economic venture to hire women [...] Only through entrepreneurship will the economy grow and with it, break down barriers between religious and secular, Jews and Arabs which will break down the barrier of the heart.

The most emotional moment of the day was when 98-year-old Ruth Dayan was presented with the Jasmine Lifetime Achievement Award. Nearly 50 years ago, Ms. Dayan established Maskit, a textile company that employed women representing the diversity of Israel: Jews, Arabs, Druze, and Bedouin.

Read the coverage of the event on President Rivlin's homepage here.

Read a summary of the event on the Strauss Group's website here.