On March 23, Israel held its 4th election in less than two years. While results will not be considered completely final until March 31, 99% of votes are now counted and preliminary results are in. Below are the major insights concerning Arab parties and the Arab vote.

Neither Netanyahu’s right-wing bloc nor the opposition parties have a clear path to form a 61+ seat governing coalition without the inclusion of Ra’am or the Joint List. Arab political parties—and Ra’am especially—are thus expected to play an unprecedented role in coalition negotiations.

Arab Parties and Candidates (View lists of candidates per party)
Arab Knesset representation is expected to decrease in raw number of seats from 17 to 13 (one Joint List MK is Jewish), which includes three Arab candidates from the Jewish-led left-wing Meretz and Labor parties. The number of seats held by Arab-led parties will decrease from 15 to 10. Note that in these elections, roughly 36,000 votes were needed for a single Knesset seat. 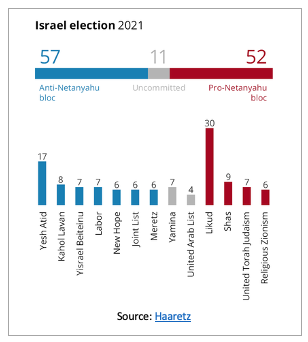 Votes for PM Netanyahu
One of the most surprising developments in this election season was PM Netanyahu’s direct outreach to the Arab electorate. An about-face from prior strategies of exclusion, this time PM Netanyahu appealed directly to Arab voters to achieve their goals by circumventing the Joint List and voting for Likud.

Pre-election polls predicted up to 2 seats for Likud coming from the Arab electorate. While a full breakdown is still pending, early tallies from major Arab cities suggest that while Arab votes for PM Netanyahu did rise significantly, they still amounted to very few overall. According to the Times of Israel:

If, as some speculated, the strategy was also to further disperse and depress the Arab vote, then it can be seen as more effective. 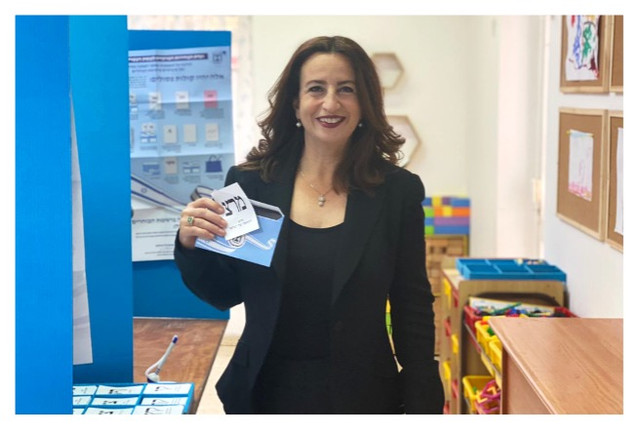 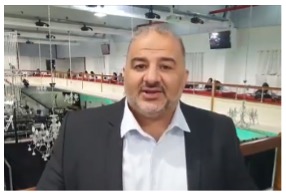 It appears that Mansour Abbas' political gamble – separating from the Joint List and seeking influence through collaboration with Netanyahu’s—paid off: Ra’am is now positioned as a likely lynchpin in for either PM Netanyahu or the opposition parties to form a coalition. He is now well-placed to negotiate for the prioritization of plans central to his political platform or even to head a government ministry.

As negotiations begin, Abbas stated that he is "not obligated to any bloc or any candidate" and that he is open to joining a right or left-wing government as long as they make it works toward solutions for Arab society.

Although Abbas might end up positioned to provide the missing votes for Netanyahu to form a majority such an alliance would not be easily formed. Parts of Likud party has already voiced their objection to a partnership with Ra'am. Netanyahu's far-right allies, the Religious Zionist Party headed by Itamar Ben Gvir, has pledged to reject this arrangement. The Religious Zionist party poses a challenge for Ra’am as well, given their public anti-Arab views. Shua Mansour Masarwa from Ra’am shared, “We won’t sit with racists who threaten us, who threaten Al-Aqsa. There are other options for a government.” However, Ra’am has been more ambiguous about alternative options such as external support—voting with a Netanyahu government, making it possible for it to function, without actually being part of the coalition.

Other options include the possibility of Ra’am supporting the opposition. Ra’am leadership has hinted that it believes this approach involves more natural allies and may better advance its goals, but there have been no formal moves on either side thus far. Either coalition formed on the basis of Ra’am support would likely be unstable for the vast ideological differences of its members.

Although final outcomes are still pending and long negotiations are still ahead, public discourse and political strategy regarding the Arab electorate has already changed as a result of this election. By actively campaigning in Arab communities, Netanyahu opened the door for Jewish political parties across the political spectrum to do so without the political consequences displayed in previous elections. This shift is already visible in the ongoing frank and public discussion regarding including Ra’am or the Joint List in a governing coalition.

Basha’er Fahoum-Jayoussi, the co-chairwoman of the board of the Abraham Initiatives, called this a “historic moment.”  “The Arab vote is not only being legitimized but the Palestinian-Arab community in Israel is being recognized as a political power with the ability to play an active and influential part in the political arena”, she explained.

While this is a major development toward Arab integration into Israeli society and politics, internally, Arab society must contend with the voter apathy and internal divisions laid bare by this election. Reflecting on the diminished turnout, which he attributes to the dissolution of the Joint List, Jack Khoury writes, “Arab politicians will have to do some major soul-searching.”

When the Joint List first formed, it ushered in a new stage of Arab participation in Israeli national elections and led to unprecedented Arab voter turnout. Regarding the Joint Lists’ poor performance in this election, its head Ayman Odeh said, “The takeaway is clear, when we are united, we’re stronger and when we are divided, we are weaker.”

Yet the many reasons for low voter turnout will likely be further explored in the weeks to come. Following the failed overtures the Joint List made to Blue and White in the prior election, Edo Konrad argues, “many [Arab citizens] had grown very disillusioned with the Joint List’s inability to make a palpable impact on their everyday lives from the back benches of the opposition.” Voter fatigue from repeat elections also likely contributed to low turnout. One voter in Kfar Qassem shared, “It’s hot and dusty, and I just don’t feel like it. There’ll probably be another election very soon. I’ll vote then.”

This election cycle displayed the strategic and ideological diversity within Arab society, opening the doors to greater public discourse and engagement. But among many Arab citizens the rifts that split the Joint List and exposed this diversity, writes Jacky Khoury, are “perceived as a defiant and egocentric act.” He explains: “Arab Israelis believe that in the complex relations between them and the state, the common interest must overcome what separates them; the rising violence, planning and construction issues, discrimination and the nation-state law are just a partial list.” The weeks to come will shed light on whether Abbas’ political gamble pays off beyond the ballot box.

Council for Higher Education holds conference on access for Arab students
Following the 2012 launch of its plan to enhance access to higher education for Arab students, the Israel's Council for h ...
ACRI's distributes position paper on making Jewish identity of the state a Basic Law
In recent years, several proposed bills sought to enshrine a Jewish definition of the state's identity and character in t ...