IATF Update | Jewish-Arab Politics in Israel on the Eve of t...

Four Israeli elections in less than two years are spurring significant changes in Arab citizens’ political engagement and Jewish-Arab political relations. Just one year ago, Jewish political partnership with the Arab parties was a red line for the main opposition party, Benny Gantz’ Blue and White, even if it meant losing the chance to form a government.[1] Today, the possibility of Jewish-Arab political cooperation is an integral part of mainstream political discourse on both the left and right, including unprecedented outreach to Arab voters by Prime Minister Netanyahu.

Meanwhile, the Joint List union of Arab-led parties—which has represented Arab citizens’ in the Knesset and pursued greater Arab political influence since it formed in 2015—has splintered over ideological and strategic differences. Today, the diversity of political streams within Arab society are a much more visible part of public debate and the hard-line that divided Arab and Jewish politics in Israel is beginning to crack.

In the short term, these developments can be traced to the surprising alliance formed late in 2020 between Prime Minister Benjamin Netanyahu and then Joint List MK Mansour Abbas (Ra’am or United Arab List, the party of the Southern Islamic Movement). In the long view, they are part of deeper political processes taking place within Israel’s Arab and Jewish societies. Whether these developments will increase or diminish Arab electoral power in the coming election and influence in the coming administration—and at what cost—is at the heart of current Arab political debate.

The cooperation between PM Netanyahu and MK Abbas has been written about extensively and can be boiled down to a few main points:

As elections near, Abbas “would like to position himself as an Arab party willing to co-operate with any government,” says Arik Rudnitzky. But this was possible only once  Netanyahu “made Arabs ‘a legitimate partner to any political maneuver'.”

Last November, Netanyahu accepted Abbas’ invitation to a Knesset committee hearing and committed to push through a government plan addressing crime and violence in Arab society—a crisis-level priority for Arab citizens. In return for this and more, Netanyahu can lean on Ra’am MKs for key votes on his political future.

Thus, MK Abbas’ overtures to PM Netanyahu in late 2020 “infuriat[ed] the other members of the Joint List” and directly challenged Chairman Odeh’s strategy of “equality through strength” and unity. Unable to resolve these differences, Ra’am split from the Joint List, which remains comprised of the three other parties: Hadash, Ta’al and Balad.

Since the Joint List's electoral success is one of the reasons a decisive majority has eluded Netanyahu over these last two years, weakening the List and dividing the Arab vote is thought to work in his favor. Indeed, Likud’s Arabic campaign focuses on branding the Joint List as ineffective.

Public responses to these developments and their possible implications are less clear-cut. But they shed light on deeper processes happening in Israel’s Arab and Jewish communities. The formation and growth of the Joint List reflects Arab citizens’ intentions to participate at the highest levels of Israel’s political and governing arenas. Simultaneously, this unity also obscured pragmatic and ideological differences within Arab society.

In recent years, practical socio-economic priorities (urgent issues like violent crime, employment, and housing) have been at the top of the political agenda for most Arab citizens. Likewise, though complex and fraught, the government has increasingly acknowledged and taken action on these priorities.

By and large, the secular socialist Hadash, Palestinian nationalist Balad, Arab secular Ta’al, and traditional religious Ra’am, have been able to work across differences to represent Arab interests along these lines.

While ‘promoting a peace agreement with the Palestinians’ ranks far lower on Arab political priorities, “in terms of identity,” write Ameer Fakhoury and Meron Rapoport, “there is no real difference between a so-called ‘Arab Israeli’ and a Palestinian, whether he or she is a citizen of Israel, a resident of the West Bank or Gaza, or a refugee outside of Palestine.” “We are the same people,” explains Nasreen Hadad Haj’Yahya, except that “the latter live under a military regime and don’t have the same legal rights as we.”

This is partly why the Joint List’s unanimous recommendation of Benny Gantz for Prime Minister in 2020 was so groundbreaking. At the time, only Jewish opposition parties had real incentive to partner with the Joint List. Thus, if the Joint List was leading the drive for real inclusion, that made Arab politics in Israel de facto those of the center and left, even if that meant cooperating with a former military chief of staff.

Now that Gantz’ rejected the Joint Lists’ recommendation and the right-wing has opened its gates to Arab voters and leadership, Arab society’s political left and right is finding new definition.

Strategically: Mansour Abbas’ and PM Netanyahu’s appeal to Arab voters are based on a similar premise: cooperating with those already in power is a better bet for solving problems at home.

“After more than a decade with Netanyahu in power, some Arab politicians have put forward a new approach: ‘If you can’t beat him, join him,’ said Mohammad Magadli, a well-known Arab television host.”

Critics warn that there is little guarantee that promises made by Netanyahu on the campaign trail will be fulfilled, while splitting the Joint List is likely to incur lower Arab representation overall. 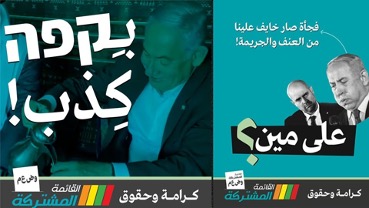 Translation: “Suddenly he's worried about us because of crime and violence! Who can you trust? Stop the lies!”

Ideologically: perceptions of “right” and “left” in Israel are defined more than anything by positions on the Israeli-Palestinian conflict. Mansour Abbas’ himself acknowledges that working with the right can be construed as a betrayal of the Palestinian cause: “I have this deep personal conflict inside of me ... [but] You need to be able to look to the future.”

Right-wing cooperation may yield budgets and civic rights, writes Ameer Fakhoury, but warns that it does so with the aim of erasing Arab citizens’ Palestinian identity and its pursuit of national rights and true equality. Jewish and Arab political activists on the left contend that only partnership with the center-left has the potential to build cooperation towards shared citizenship for both peoples (Hebrew).

From this perspective, recent statements by Yair Lapid (Yesh Atid), the current frontrunner for the opposition, that he would form a coalition with the Joint List is an historic development.

Socially: the left and right division is surfacing social issues in Arab public discourse. In 2020, Knesset legislation to limit ant-LGBTQ “conversion therapy” proved to be a serious test for the Joint List. With Arab society far less tolerant of LGBTQ issues, only three Joint List MKs (all from Hadash) voted for the measure, taking a political hit.

Prior to this, writes Jack Khoury, “most Joint List Knesset members had voted as a block on civil issues and their voting patterns hadn’t attracted particular attention.” In this cycle, Ra’am has been highlighting Muslim religious values in its statements and campaigns, injecting terms like ‘pure’ and ‘conservative’ into the political lexicon – forming a traditional platform in Arab politics. 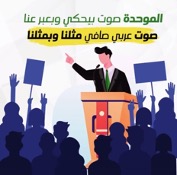 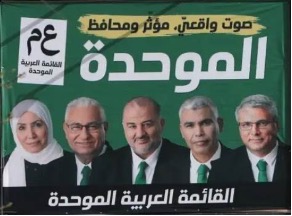 On social issues, Ra’am has more in common with Jewish religious parties than with the Joint Lists’ secular communist party, Hadash (by some accounts the only genuine left-wing party in the list).

LGBTQ and feminist activists in Arab society are concerned that Ra’am’s reinforcement of a conservative social platform in Arab society will harm their progress. Simultaneously, activists also consider having these discussions out in the open a positive development.

Public opinion polls suggest that Netanyahu’s unprecedented courting of Arab voters and alliance with Ra’am has positively changed Jewish positions on Jewish-Arab political partnership and furthered overall Arab interest in being part of a governing coalition.

The Israel Democracy Institute’s Israeli Voice Index from March 2021 shows that in September 2019, less than a fifth of the Jewish public supported this possibility compared to more than a third who support it at present, with most of the change in positions on this issue occurring among the right and the center. (Table 1) 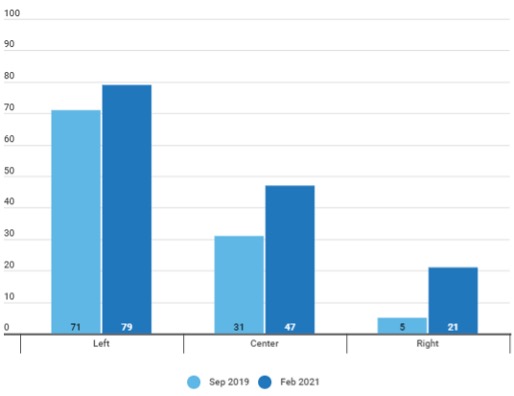 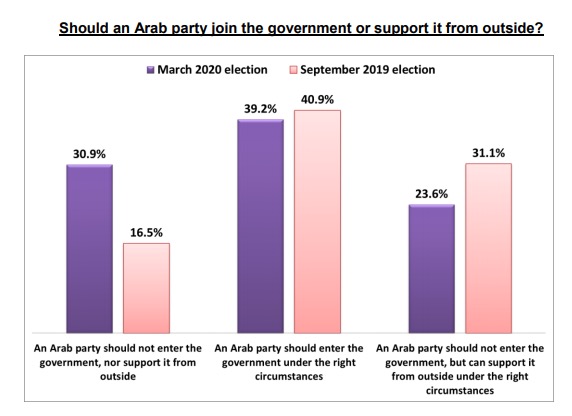 Today, polls show an Arab voter turnout of close to 60%. This is a higher turnout than predicted in late 2020, when polls predicted a significant drop from 65% in the prior election to 56% due to the infighting within the Joint List and disappointment with  its inability to translate electoral strength into real political power.

About 42.9% of the respondents stated that they will vote for the Joint List (Hadash-Balad-Ta’al), 21.0% for the United Arab List (Ra’am) and 8.1% for the Likud, suggesting the following number of seats granted per party by the Arab community (Table 4):