On March 1, Israel’s cabinet approved a NIS 150 million ($45 million) plan to reduce violent crime in Arab society and has secured funding for the NIS 100 million portion allocated to police infrastructure. This development emerged in response to sustained pressure from Arab citizens of Israel for government response to crisis-level rates of violent crime in Arab communities and address its root causes.

See an IATF summary of the rise in crime in Arab society during COVID-19.

The plan was both welcomed as an important step but met with concerns over 1) The size of the budget compared to previous plans and proposals 2) Its prioritization of police station construction and limited plans for measures beyond enforcement and 3) that, as a campaign promise, it may not come to fruition after elections.

The approved NIS 150 million (USD 45 million) plan will allocate about 2/3 of the funds primarily to the police and 1/3 to municipal Arab governments and other partners. NIS 100 million has already been secured for specific police infrastructure programs, which are supposed to begin as soon as possible:

The plan includes an additional NIS 50 million of social programs and interdisciplinary projects. This portion of the plan has yet to be budgeted and the government has not shared a timeline for its implementation:

Tzahi Braverman, CEO of the Prime Minister’s Office, has been tasked with the plan’s implementation in collaboration with the Ministry of Finance, Ministry of Homeland Security, Ministry of Education, Ministry of Labor, Welfare and Social Services, and Authority for Social Equality. However, all of this will be in flux following the election and establishment of a new government. 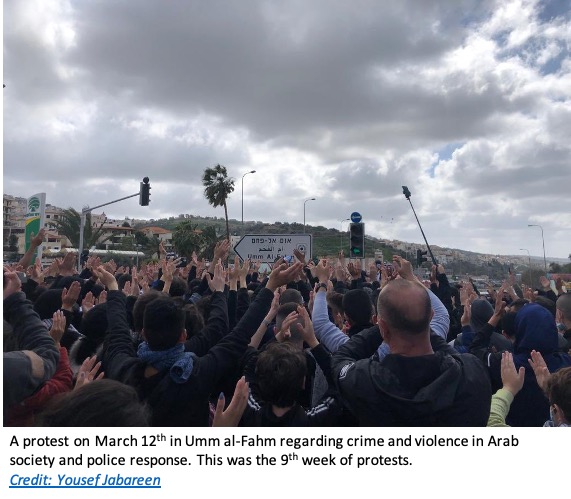 When Netanyahu it was announced the plan in March after much anticipation, responses were mixed. Mayor of Umm al-Fahm, Dr. Samir Mahamid, shared, “There is no doubt that this is a step forward… the decision states that Arab mayors will be partners in the formulation of the plan… this should not be taken for granted."

Arab mayors, who recently created their own proposal with a NIS 700 million budget, were disappointed with the 150 million NIS plan, particularly when a 2016 program allocated NIS 2 billion to combatting crime in Arab society over 4 years, and a five-year plan completed by an Inter-Ministerial Committee in 2020 also had total allocations of roughtly NIS 2 billion. Joint List Chair Ayman Odeh shared, “Netanyahu is offering us a Band-Aid… It’s impossible to solve a decade of neglect with NIS 100 million.”

The plan has further come under criticism for allocating the majority of its funds to the construction of police stations rather than trust-building between the police and local communities and the root socioeconomic issues that have enabled organized crime to flourish in Arab society. The Abraham Initiatives, an NGO focused on addressing crime and violence in Arab society welcomed the plan as a first step while also sharing, “The focus on police stations — whether in their establishment or renovation — is not enough, as the wave of crime in Arab society requires a much broader response.”

As the plan was announced three weeks before an election, in which a wide range of political parties are appealing to the Arab electorate, some Arab leaders and commentators view it as a pre-election campaign promise and are concerned about it coming to fruition. For example, Firas Badahi, the mayor of Kfar Qara, described the plan as a “cynical use” of crime and violence in Arab society as a political tactic rather than a serious attempt at addressing the challenge. Critics of the plan argue that the choice to immediately fund the construction of police stations but budget the remaining programs only following the election affirms their suspicions.

As discussions regarding the plan, its timing, and budget remain ongoing, demonstrations continue in Arab society regarding the crime wave that has grown unabated during COVID-19. On February 26th, just days before the plan was released, a roughly 500-person demonstration against gun violence in Umm al-Fahm led to clashes between protestors and the police. Earlier in February, Over 10,000 people marched in a protest in Tamra, following the death of a 22-year-old nursing student caught in the crossfire.