This past year has seen a sharp rise in violence and crime in Arab society in Israel, already the top-most urgent concern among Arab citizens. COVID-19's severe socio-economic implications in Arab communities have driven many individuals to take out gray and black-market loans, strengthening criminal organizations operating within Arab towns and sparking a record number of murders.

In 2020, 113 Arab citizens were killed in violent incidents, 17 of whom were women. This represents the highest number in at least 20 years and an increase of more than 20% from the 94 murders that occurred in 2019, and nearly double that of 2015. The number of murders in Arab society is expected to continue in 2021, with 12 Arabs killed since the beginning of the year.

Causes for the soaring violence and crime in Arab Society are varied and rooted in disparities such as a lack of educational frameworks and economic opportunities at key stages of life, lack of access to capital, organized crime, longstanding family feuds, and more. Civil society leaders, however, point to a need for adequate law enforcement as the underlying factor and have been calling for the government to approve and implement a NIS 5 Billion anti-violence proposal developed over the last year.

In late 2020, PM Netanyahu attended a meeting of the Special Knesset Committee on Prevention of Violent Crime in Arab Society, chaired by MK Mansour Abbas (Joint List, Ra’am) and pledged to bring the plan to approval within two weeks. However, with fourth elections called, no plan has yet been advanced.

The Prime Minister recently reiterated this commitment while campaigning in Nazareth and again on Jan 24 at a meeting with Arab mayors (Hebrew)  where he also tasked   Minister of Internal Security, Amir Ohana, and Police Commissioner, Kobi Shabtai (Hebrew) with taking immediate steps toward addressing the issue, even before such a plan is implemented.

Civil society organizations and Arab political leaders have been strongly advocating for this plan and immediate action. In the meantime, organized protests, impromptu demonstrations, and prayer gatherings have become more frequent in Arab communities, underscoring the frustration in Arab society. 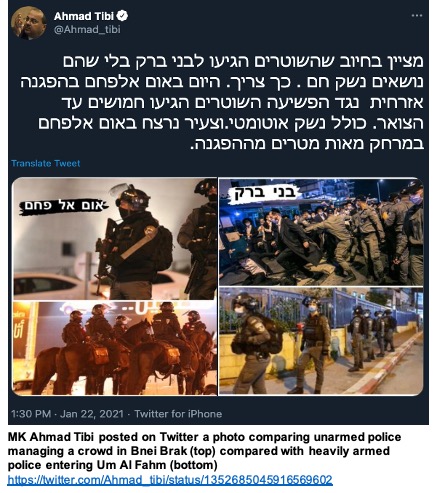 Recent clashes with police over Coronavirus enforcements in Ultra-Orthodox communities have deepened the sense in Arab society that police have “different rules” for Arabs and Jews.

President Rivlin, in remarks welcoming incoming Police Commissioner Yaakov Shabtai, acknowledging the deep-seated issues and called on the new commissioner to be responsible for all:

“We trust you to enforce rules with wisdom and sensitivity,” Rivlin said. “You are the police commissioner of all Israelis – Jews and Arabs. You are responsible for public order for all of us.”