Rising rates of violent crime continue to be a top-most concern in Israel’s Arab communities. Despite increased awareness and attention to the issue in recent years, the number of Arab lives ended by homicide has gone up annually since 2015, with 91 deaths in 2019—two-thirds of all cases in Israel. According to the Abraham Initiative’s Personal and Community Security Index of 2019, 60% of Arab citizens do not feel safe in their own communities.

In 2020, early concerns that the Coronavirus pandemic would lead to increased violent crime have borne out. Social confinement and the loss of jobs and income has led to an uptick in domestic and social violence (such as family feuds) and organized crime. As of June 2020, 51 Arab citizens have been claimed by manslaughter, including eight women, compared with 33 at this time in 2019. The Aman Center has recorded 15,000 acts of violence in Arab society in 2020 thus far and 30,000 in 2019—more than triple the number recorded by police.

The social and economic strains in recent months map onto pre-existing factors behind the high rates of violent crime in Arab communities. Among these are poor police-minority relations and inadequate police services, high rates of poverty and unemployment, lack of social services, changing family structures and traditions, among others. Notwithstanding increased police presence and cooperation with Arab localities over this period, civil society sources say trust in police has further decreased because violent crime continues to rise. Reduced trust may also be related to two recent incidents in which disabled Arab men were shot by police. 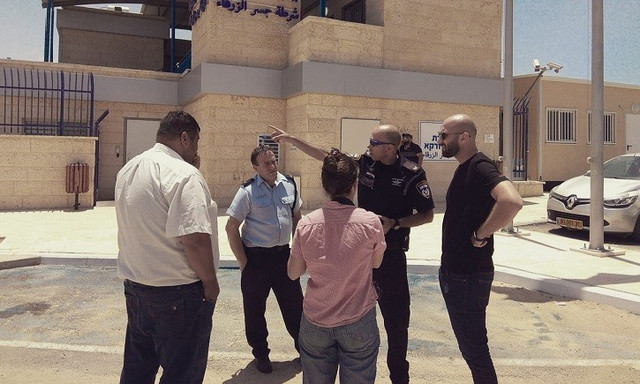 In recent years there more government efforts and budgets have been invested, including Government Resolution 1402 from 2016 that budgeted for increasing police stations, officers and services in Arab society, and national commitments in 2019 to combat organized crime and domestic violence in Arab society. Still, rates of violent crimes have continued to rise.

With increased urgency over the pandemic period, both short and long-term measures have been taken: The Knesset’s Special Committee on Eradicating Crime in Arab Society, chaired by MK Mansour Abbas (Joint List) was made a permanent committee which aims to promote a “plan that will flatten the crime and victimhood curve within the Arab society.” It most recently recommended increasing GR-1402 budgets for police stations in Arab communities. On August 11, the Ministry of Labor, Welfare and Social Services presented the committee with its national plan to reduce violent crime in Arab society with special focus on the 71,000 Arab citizens who neither work nor study.

In parallel, an inter-ministerial Task Force created in 2019 by Prime Minister’s office launched a national plan in July to address root causes and eradicate crime in Arab society. Finally, the new Minister of Community Empowerment and Advancement, Orly Levy-Abekasis led a roundtable in partnership with MK Aida Toume Sliman and MK Iman Khatib-Yassin on violence against women in Arab society. Additional insights into the issue and into government and civil society responses are detailed below.

According to police officials, the current economic crisis impacting many young Arab citizens and private business owners will continue to exacerbate violence in the coming months as many turn to the gray and black markets to address rising debts.

State-guaranteed loans were made available to small and medium-sized businesses. However, many had conditions that were difficult for Arab-owned businesses to fulfill. Many Arab loan applications were rejected or only partially granted. As a result, many business owners sought out gray market loans at exorbitant interest rates.

As Nidal Othman, Deputy Mayor of Tamra, explains in the July issue of Bayan, these deepening financial difficulties are creating a vicious cycle of borrowing: “Indeed, some of the business owners have come into conflict with criminal elements who are involved in debt collection, after checks that were written prior to the crisis did not have sufficient coverage. These checks came into the hands of the collectors and they demanded immediate redemption and, in many cases, exploited the situation to offer additional high-interest loans.”

Maj. Gen. Jamal Hakroush, the head of the Directorate for the Development of Policing Services for the Arab Population, stated at a Knesset meeting that the police "know that loans in the gray and black markets are a blight, they’re a serious affliction, especially in Arab society. Much of the shooting and violence is caused by this”, but that the police and prosecutors find it hard to bring indictments in these cases. 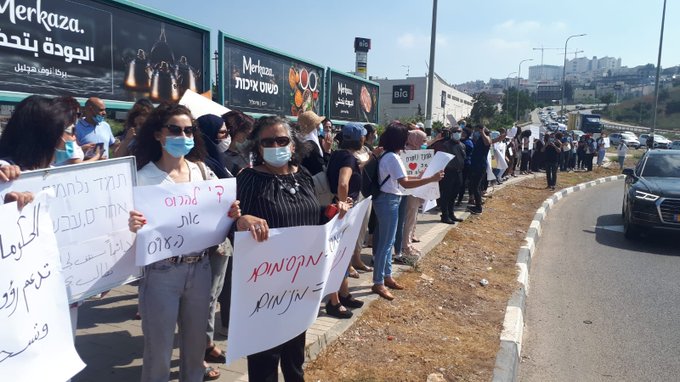 Police noted a 16% rise in domestic violence reports in Israel, with calls to domestic abuse hotlines soaring between March and April. Women Against Violence, which operates a hotline in Arabic, recorded a 42% increase from March 15 to April 15 relative to last year.

“Women’s confinement with their abusers, compounded by the uncertainty of when the coronavirus crisis will end and growing economic stress, is “a bubbling pressure cooker,” says Michal Gera Margaliot, the executive director of the Israel Women’s Network.”

The physical violence is exacerbated by the collapse of support systems. At the start of the Corona crisis, government welfare services were closed due to preventative measures against the spread of the disease. After pressure from civil society organizations, social workers were brought back in full capacity. At the same time, counselors were not seen as essential workers and put on leave. Civil society leaders advocated for their return and called for single mothers to qualify for subsidies on a national level, and to be exempt from property tax at the municipal level, as are businesses and civil society groups.

In addition to the plans and recommendations listed above, the Social Affairs and Social Services Ministry developed a silent hotline allowing survivors who cannot call while quarantined to report their cases via text messages; it is also planning a multilingual campaign to publicize this resource. Arab MK Aida Touma-Sliman, who heads the Labor, Welfare and Health Committee, noted that these campaigns take longer to reach Arabic speaking communities and immediate action needed to be taken.

In recent years, eight new stations in Arab towns have been established and investments have been made to augment police presence in those areas. While budget cuts have hampered efforts, especially relative to the resources needed to fight organized crime, officials also say that along with policing, educational efforts and preventive action is required of mayors, imams, and the heads of communities and extended families.

Mayor of Tira, Mamoun Abd al-Hay, who has been raising the issue of violence in Arab communities, told Haaretz, that “on the backdrop of the grave economic situation and the years of neglect, the absence of a horizon for young people here will cause them to turn to crime. An investment in educational and cultural projects is more important than any police presence.”

In February, prior to the Corona outbreak, The Abraham Initiatives and Aman Center launched a 100-day campaign, demanding Knesset members to commit to five steps in the first 100 days of government that would enhance effective enforcement targeting organized crime, drug and weapon trafficking, and expand programs to combat domestic violence. Since the campaign the head of the TAI’s Safe Communities Initiatives advised and presented to both the Knesset Committee and the Inter-Ministerial committee referenced towards the national plan to address root causes of crime and violence in Arab society.

At the outbreak of the crisis, a group of feminist organizations and individual activists established an Emergency Feminist Headquarters with the goal of expanding and integrating responses to challenges faced by women during the crisis. The headquarter includes veteran organizations such as Mahapach-Taghir, Adva Center, Itach-Maaki, Al-Tufula Center, Isha L’Isha, Women Against Violence, and other feminist NGOs and individual activists. Among the notable activities of the headquarter is joining two campaigns condemning violence against women in Arab society and taking part in a demonstration against budget cuts affecting the national program on violence against women.

The headquarter has also arranged for the transportation of Arab and Jewish women to participate in rally to protest violence against women (including gender-related killings of women and girls) that took place in Tel Aviv-Yafo on June 1st with participation of around 12,000 people. Additionally, the headquarter has prepared a list of demands they request to be included in the new government national budget which is expected to be approved during August. In June and July, additional smaller protests took place in Rahat and Taibeh in response to the deaths of women at the hands of their husbands, drawing dozens of participants, as well as implicit and explicit threats from the community.

In an effort to understand and address the "phenomenon [of violence] and its spread, particularly among youth, who are the most likely to both perpetrate and fall victim to violent crime", Baladna - Association for Arab Youth and the Centre for Trust Peace and Social Relations at Coventry University in the United Kingdom, compiled a report of statistical data on murder victims in the Arab society in Israel between 2011 and 2019.