READ FULL PDF HERE or BELOW

In September 2019, in the lead-up to Israel’s second general elections, PM Netanyahu announced intentions to annex parts of the West Bank and later made this a top and even urgent priority of the new unity government, formed in May 2020. While no action has been taken thus far and the parameters of possible annexation remain unclear, the declaration has generated strong responses within and outside of Israel, mostly in the context of its anticipated impact on the two-state solution, the viability of Palestinian statehood, relations with the wider Arab world and Israel’s standing in the international community.

In the ensuing controversy, less focus has been placed on the potential impact on and perspectives of the Arab minority living within Israel. Arab citizens of Israel comprise almost one-fifth of Israel’s population, approximately 1.6 million people.1 At once part of Israel’s national fabric as citizens living, studying, working and voting in the country, Arabs inside Israel also share a strong sense of identity and peoplehood with--and concerns for—Palestinians in the West Bank and Gaza. In some circles, Arab citizens of Israel envision serving as a bridge between the populations. 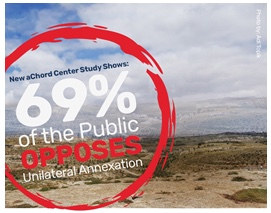 Arab public discourse in Israel is quite consistently opposed to the proposed annexation. This view is reinforced by a June survey by aChord Center, which found that 92% of Arab polled oppose annexation, and a May poll by the Israel Democracy Institute which showed only 8.8% of Arab respondents in support. The only positive take has been that, if advanced, annexation may serve a powerful unifying factor (Hebrew) for Jews and Arabs on the progressive left in Israel.

It is important to note that with the second wave of the Coronavirus, annexation has largely dropped off the main streams of Jewish and Arab public discourse in Israel. Though the issue is interwoven into widespread public protests throughout the country, it is as part of the broader frustrations with government management of the pandemic. In addition, Arab citizens have by and large not been part of the protest movement. 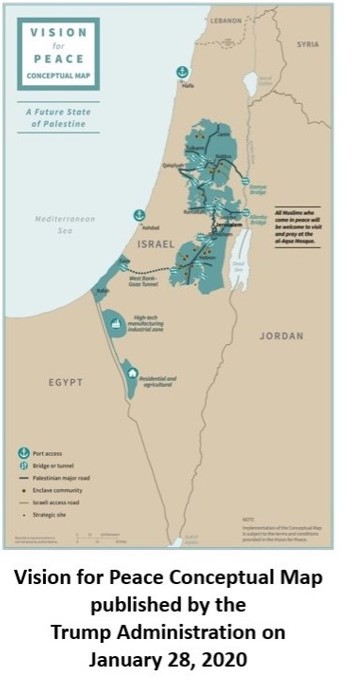 To date, little official detail has emerged about the specific terms of the proposal—neither about the extent of territory under discussion nor the status of the Palestinian population living within those boundaries. The Institute for National Security Studies maps out the three possible approaches: “(1) an approach that adopts President Donald Trump’s plan and calls for the annexation of half of Area C which constitutes some 30 percent of the West Bank; (2) the annexation of the Jordan Valley which constitutes 22 percent of the West Bank; or (3) a limited approach, which seeks to secure the existing Israeli settlements and prevent their future evacuation.”

The first and most extensive approach encompasses some 400,000 Israeli settlers and roughly 135,000 Palestinians (4.5% of the Palestinian population of the West Bank) living in the territories under discussion. The more limited options vary between prioritizing major settlements with large Israeli populations, and territory that is strategic for security purposes. The more limited approaches encompass anywhere from a few thousand to roughly 56,000 Palestinian residents.

It is not clear what status Palestinians who, post-annexation, would be living under Israeli sovereignty would have. According to PM Netanyahu, most of the population would remain in Palestinian enclaves under Israeli security, and therefore the question of Israeli residency or citizenship would be moot. For those not in enclaves, Israeli legal experts argue that residency and eventually citizenship will need to be offered for Israel to retain democratic integrity where members of a minority group have conditional access to citizenship, while a majority has full exercise of those rights.[4]

In a letter sent to Democrats in the US Congress this June, all 15 MKs of the Joint List party wrote as “the third most supported Party in recent elections, representing the Palestinian minority in Israel as well as progressive Jews,” they view the American administration’s enabling of annexation via the Trump Peace Plan as an “embrace of the positions of Israeli hardliners" who would otherwise not have been able to advance the option.

MK Aida Toume-Sliman, who initiated the letter, connected the struggle against the annexation plan with the demand for equality to Arab citizens within Israel: “We understand that part of our reality and part of the situation where we don't get rights and equality is because we are Palestinians and because Israel continues the occupation of the Palestinian people”. 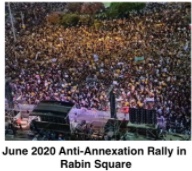 Joint List Chairman Ayman Odeh reinforced the position of the Joint List against annexation as representative of shared Jewish and Arab interests in a speech at an anti-annexation rally in Tel Aviv: “There is no such thing as democracy for Jews alone,” he said. “We are at a crossroads. One path leads to a joint society with true democracy and civil and national equality for Arab citizens. The second path will lead us to hatred, violence, annexation, and apartheid.”

MK Odeh also attended a joint teleconference in Ramallah where leaders from Fatah and Hamas, competing political factions in the West Bank and Gaza, declared their intention to work together to achieve an independent Palestinian state and foil the annexation plan. Drawing significant criticism from across the Israeli Jewish political spectrum for engaging with Hamas, Odeh argued that he came to show support of internal Palestinian reconciliation.

In Arab public discourse, the event was seen more as a Jewish misunderstanding of Arab connections to their Palestinian brethren: “The Arab population in Israel is part of the Palestinian people, as are those living in Gaza under Hamas rule and those living in the West Bank under Fatah rule” wrote Odeh Bisharat. “We grew up on the slogan that the Arabs in Israel are a bridge to peace with the Arab world. But when the Arabs in Israel roll up their sleeves and rush to fulfill the role of the bridge, they are denounced as supporters of terrorism (Hebrew)”.

In the meantime, by some indications, annexation may form a basis for Jewish-Arab political cooperation within Israel. Political activist Ameer Fakhoury argues (Hebrew) that this plan can serve a unifying factor for the Joint List, the Jewish left, and possibly also parts of the center-left—providing more unifying power than the shared interest, over recent elections, of changing the incumbent administration. On June 22, there was early indication of such potential cooperation in the Knesset when the center party Yesh Atid collaborated with Meretz and the Joint List, voting together in favor of a no-confidence motion submitted by the Arab Party, titled "The Government of Annexation and Apartheid (Hebrew)."

Various Arab and Jewish-Arab civil society and activist organizations in Israel have also expressed firm opposition to the annexation plan and many have issued statements. Examples include:

Among the wave of protests throughout the country, several in recent weeks have been focused on annexation. In early June, organizers of an anti-annexation rally in Tel Aviv  issued a statement that “Netanyahu and Trump are reinforcing a violent reality of hatred and segregation, and now they want to divide and annex parts of the West Bank, uproot residents, and deny citizenship from Israel's Arab citizens from the Triangle region and Wadi Ara.”

Although towards July 1, it became quite clear that the annexation plan would not be carried out (at least in the original date), there was still fear within Arab society that the government would try to make a last-minute move. Hence, several actors within this society called for wide-scale anti-annexation activities that day. For example, Ghadir Hani of AJEEC-NISPED called on people to take to the streets the following day to prevent last-minute action. Indeed, on July 1, several anti-annexation demonstrations took part in various locations in Israel, the main one being in Wadi Ara. Demonstrators held banners denouncing the annexation, and called for Palestinian unity in order to foil it. (Arabic).[5]

Rula Daood from Standing Together, which organized several of these demonstrations and ones prior, posted that “it is time to go to the streets and let the government understand that we won't be safe with the occupation and that we won't give up the struggle for our future”.

Arab media discourse reflects the almost consensual position against the application of Israeli sovereignty in the West Bank. In an article in Panet, journalist Ahmed Hazem called this plan an “occupational colonial project”, suggesting that it might lead to a third intifada (uprising) in the West Bank (Arabic).[6] In an article in Bokra, Rajab Abu Saria warned even from the more limited forms of annexation, arguing that it may begin by declaring the application of Israeli law only over the three major settlement blocks, but the “Israeli appetite” will drive the government to annex the Jordan Valley and then to dismember the entire West Bank by annexing all settlement, including the most remote ones (Arabic).[7]

In interviews to Israeli and international media, Mohammad Darawshe, Director of the Centre for Equality & Shared Society at Givat Haviva, correlated annexation to the 2018 Nation-State Law, seeing it as a reflection of an “Israel [that] wants the land without the people on it, without equal status.”

Reflecting on the longstanding residency status of East Jerusalem Arabs, activist Aziz Abu Sarah,  explains that “Our experience with annexation has not proven it to go well. [East Jerusalem Arabs] remain marginalised as a community and I think those who live in the areas that are going to be annexed will be marginalised,” he says, pointing to existing inequalities in East Jerusalem, on subjects as varied as housebuilding to school budgets.

[1] According to Israel's Central Bureau of Statistics, around 350,000 of the Arab population in Israel live in East Jerusalem, and therefore are not Israeli citizens, but hold a status of permanent residents of Israel. Ever since the annexation of East Jerusalem in 1967, the Arabs of East Jerusalem carry blue identity cards, enjoy various civilian rights and are entitled to welfare services such as National Insurance, health services, and municipal services, but they are not eligible for an Israeli passport and have no voting rights for the Knesset.