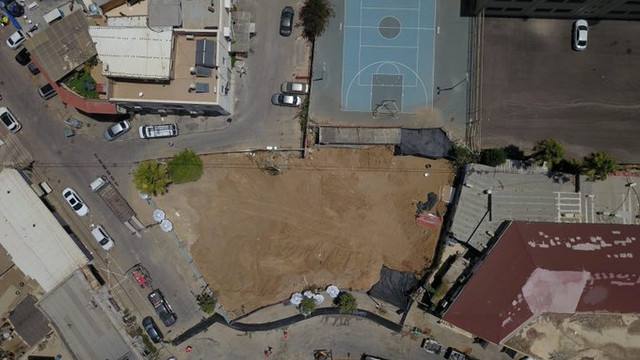 Since June 9, protests over a plan to build a homeless shelter on an unearth Muslim cemetery have taken place in Jaffa. While the immediate cause of the riots is the Tel-Aviv-Jaffa municipality’s intention to build on the cemetery, some argued that residents actually have more profound grievances against the authorities. Three events in the past year have adversely effected Jaffa residents' relations with the authorities - the total closure of Jaffa's central street, Jerusalem Boulevard, for the construction of the light rail, at a short notice and contrary to plans promised to residents; the publication of an outline for a Muslim cemetery without consulting the local residents; and the violent riots that erupted in March due to arrests the police carried out there. Some are worried that the grievances of Jaffa Arab residents will cause further violent riots if the authorities will not address its root causes (Hebrew).

The cemetery in question dates to the 18th century and was discovered in April 2018 as the municipality began digging to construct the foundation of the planned hostel for the homeless. The Muslim community claimed that the cemetery is named El Asaf and is fighting to preserve it, due to its perceived sanctity. Abed Gazaabou Shehadeh, Tel Aviv’s only Arab council member, said he intended to withdraw from the council over this decision (although he subsequently expressed optimism about the prospect of resolving the issue). In an interview with a Hebrew radio station, Shehadeh protested what he called "the selective history of the municipality" while adding: "Even if you build over a cemetery, there are rules about how to deal with the graves there (Hebrew)."

Following the struggle for the cemetery, Tarek Ashqar, chairman of Jaffa's Islamic Council - a welfare organization representing about 7,000 members - claimed that "we offered a lot of options during these two years. We wanted to buy the lot, but the municipality did not agree. The mayor has a golden opportunity to come to terms with the Muslims. But he will not fold, and neither will we." (Hebrew)

After a legal fight, the District Court authorized the municipality to proceed with the construction. According to the court, the approval stemmed from the fact that Amin al-Husseini, former Grand Mufti of Jerusalem and President of the Supreme Muslim Council, approved removing the bodies from this cemetery due to health considerations and turning it into a football field more than 80 years ago.

Over the weekend, there was an escalation of protesters’ violence over the weekend. The most notable event were two acts of arson that took place in the central city of Jaffa on Friday night, an Eden water company truck was ignited, causing severe damages to cars parked nearby and a Molotov cocktail (gasoline bomb) was thrown into a Tel Aviv municipal building, causing extensive damage to at least one of the offices in the building. The escalation of the violence even drove the American Embassy in Israel to issue a warning on Saturday, advising its staff to avoid visiting Jaffa. It also called on US citizens "to remain vigilant and take appropriate steps to increase their security awareness, as security incidents often take place without warning."

Besides the violent demonstrations, some Muslim activists protested against the Municipality decision in peaceful ways. For instance, some activities erected fake tombstones to drive the point that this is a Muslim site of heritage and memory. This was not the first time local Muslims used this method, in May 2018 members of Jaffa's Islamic Council broke into the compound, buried the remains the Municipality dugout, and built concrete gravestones over them. In addition, protesters held public Muslim prayers on that site.

The protest even gained the support of Deputy Minister of Interior, Yoav Ben-Tzur (from the Haredi political party Shas). On June 14, Deputy Minister Ben-Tzur sent a letter to Tel Aviv Mayor Ron Huldai asking him to prevent the desecration of the Islamic cemetery, arguing that “This is not a formal legal issue, but rather a first-class ethical issue, which is our commitment to upholding the dignity of the dead and prevent harming the public's feelings” (Arabic).

However, the Tel Aviv-Jaffa Municipality showed no willingness to acquiesce to the protesters' demands. In an official statement released after the weekend's riots, the Municipality declared: "The perpetrators are a small handful of people who do not represent most Jaffa residents and who have lost confidence in the municipality. We will continue to build a homeless shelter, according to court approval, and will not stop because of the damage done to municipal or other public property.”

On June 17, in response to an emergency petition of the Islamic Council, which argued that the municipality does not possess a valid construction permit (given the time that passed since the last ruling), the court ordered to suspend the work until the hearing that was scheduled to July 22. Immediately afterward, the Tel Aviv-Jaffa Municipality announced the cessation of work on the site until the court hearing (Hebrew).