Arab Citizens and the Emergency Unity Government: Impact on... 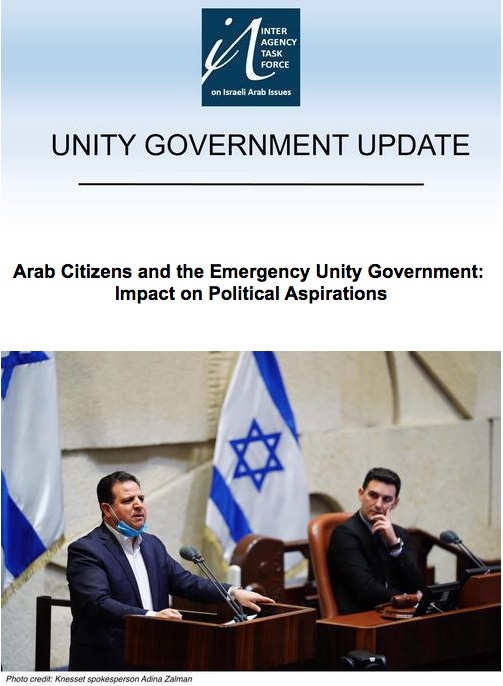 On Sunday May 17, Israel inaugurated a unity government jointly led by incumbent PM Netanyahu (Likud) and rival Benny Gantz (Kahol Lavan), ending 18-months of political gridlock spanning three stalemate elections. The new government raises questions about the future of Arab citizens’ aspirations for greater political influence and participation, and about the status of their concerns in the wake of the Coronavirus crisis.

Over the course of the political crisis, the Arab-led Joint List energized Israel’s Arab electorate by pushing for more meaningful influence in the national political arena. This culminated in a unanimous (if risky and controversial) backing of Benny Gantz—a former general—for Prime Minister, providing him the necessary votes to receive the first mandate to form a government coalition. Gantz choice to instead join forces with Netanyahu, citing the Coronavirus crisis, “was sobering for the Arab population” explained The Abraham Initiatives’ co-director Thabet Abu Ras. “The Arabs believed they were bringing change to all of Israeli society […and] proving real intention for integration.”

The unity deal leaves Arab MKs with little leverage to exert the kind of influence they seek. Because of its 15 seats, the Joint List “will still have some power to strike deals with the government in exchange for ad-hoc votes in the Knesset committees,” explains political scientist, Professor Rami Zeedan, but will not be “part of the ‘Israeli consensus.’”

Due to the large number of government positions distributed by Netanyahu and Gantz to their own party members as part of the coalition deal, few influential roles are available to any opposition party. “The fact that there is a coalition government with 73 seats points to all the hard work ahead of us in the next Knesset,” explains Joint List MK Jaber Asaqla. In addition, none of the 36 cabinet ministers (compared with 21 in the prior government) nor 16 deputy minister positions were filled by an Arab citizen of any party despite various promises by leaders.

Formed in the midst of the Coronavirus crisis, the new government is expected to almost exclusively deal with the health, economic and social implications over the coming months. However, it has also put annexation of West Bank settlements and territory on the top of its agenda. A controversial move, annexation is widely opposed by Arab citizens who see it as a final blow to the two-state solution and implementation of the Trump Peace Plan, which includes a clause enabling transfer of Arab citizenship to Palestinian sovereignty.

“We, as an Arab community, are emerging from the Corona crisis with multiple economic wounds, but also with a burning political injury due to marginalization,” writes political analyst and shared society leader Mohammad Darawshe in Bokra.com. 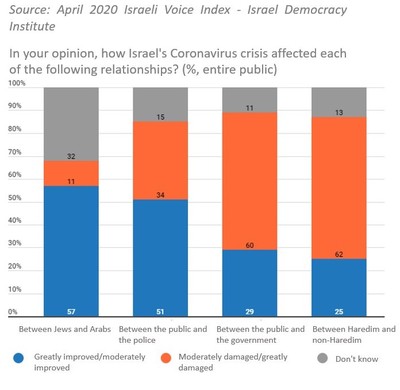 Jewish-Arab cooperation, especially on the medical frontlines, was widely heralded during the public health emergency. It was also held up as a call for similar partnership in government (see viral video ad below). Indeed, according to the Israel Democracy Institute, 57% of Jews and 65% of Arabs surveyed in April said Jewish-Arab relations improved due to the crisis. Today, Arab society’s low rates of infection, diligent prevention efforts, and cooperation with government bodies are seen as an Israeli success story. 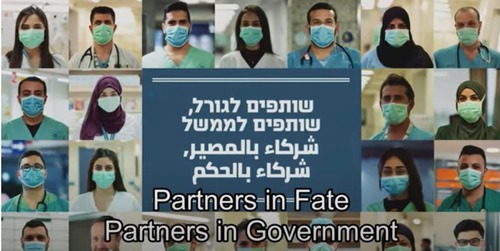 Video Ad: Have you Seen the Horizon Lately?

“While the public mood may reflect a positive trend,” explains the Israel Democracy Institute’s Nasreen Hadad Haj’Yahya, “with respect to institutional attitudes towards the Arab public and its elected officials the picture is far less optimistic. For example,” she continues, “last week the Knesset Special Committee on Welfare and Labor convened a meeting on the impact of the Corona crisis on the Arab population [and] none of the Jewish Knesset members … bothered to participate.”

The Arab community was hit hard by the Coronavirus economic shut down. Arab municipalities went on strike in May, warning of imminent collapse due to depleted revenues and government emergency funding that compensated according to local commercial tax base, leaving Arab municipalities (who have few commercial zones) with only 1.7% of the package. With 190,000 Arab citizens newly unemployed and welfare ranks up by 30%, a host of socio-economic concerns have already begun to emerge, including a surge in violent and organized crime and related damage to state and police-minority relations. Along with annexation discourse, the socio-economic strains are already threatening to walk back fragile gains in Jewish-Arab relations.

“Lacking sufficient tools to influence decisions,” writes political columnist Afif Abu Much, “will be a great challenge and source of enormous frustration for the Joint List” as well as the Arab citizens who expect the party to integrate and get things done.

In the meantime, Joint List leaders have redoubled their focus on creating a strong progressive democratic front in Israel through Jewish-Arab partnership. MK Aida Touma Sliman, who has long worked for the rights of workers and women across Israeli society, sees the Joint List as the only party that presented an alternative to annexation. In his current speeches, MK Ayman Odeh is reinforcing earlier campaign messages that “only a Jewish-Arab democratic camp can serve the sake of peace, democracy, equality and social justice.”