Druze and Circassian protest in Jerusalem and Tel Aviv

Druze and Circassian protest in Jerusalem and Tel Aviv 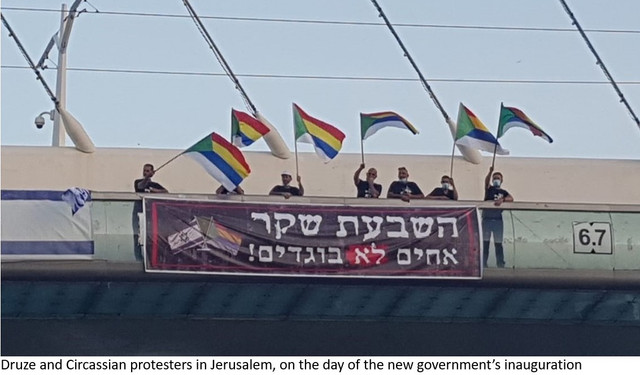 In early May, Druze and Circassian local leaders organized protests in what they call "a month of rage". Demonstrations, which are part of the ongoing demands for the Israel government to (i) transfer a budget of NIS 200 million that Prime Minister Benjamin Netanyahu pledged to allocate last December, as part of a program designated for the development and empowerment of Druze and Circassian villages in 2020; (ii) approval of a five-year development plan, which expired in December 2019 and was never renewed; (iii) amending the nation-state law of 2018 in a way that ensures the status of Druze and Circassians as equal citizens (Hebrew); and (iv) the ending of the Kaminitz Law, which enables increased enforcement against building violations, along with the demand for construction regulations in their northern communities, began with the blocking the Golani Junction, one of the main traffic junctions in northern Israel (Arabic).

The 200 million budget was promised by PM Netanyahu in 2019 as part of the original development plan for 2016-2019. Defense Minister Benjamin Gantz, as part of his campaign for Prime Minister in January 2019, promised to “fix” the nation-state law to help the Druze community. The new government is required to pass the state budget in the Knesset no later than August 18 (Hebrew).

Druze and Circassians account for slightly less than 2% of Israel's population. The men in these communities enlist in the IDF, at a higher rate compared with their Jewish counterparts - 83% among Druze and 75% among Circassians compared to 69% of Jewish men (Hebrew). Many leaders have felt that this relationship has been betrayed by recent government developments.

Druze communities, which did not have many cases of Coronavirus infections (Hebrew), were heavily affected economically. According to the heads of these authorities, the average unemployment rate in them in early May was more than 30%, and the rate of property taxes dropped by about 70% due to the economic hardship of the Druze and Circassian residents (Hebrew).

As part of the “month of rage”, demonstrations were held on May 10 outside the Prime Minister's office in Jerusalem. During the protest, Jaber Hamoud, head of the Forum of Druze and Circassian Regional Councils stated: "You have betrayed us. We are no less Israelis than the Jewish community." Hamoud also told the prime minister that the Druze do not have to prove their loyalty to the country - “you must prove your loyalty to us".

Protestors called for a general strike in Druze and Circassian communities in the north of the country, in addition to a refusal to reopen schools and businesses. This announcement arrived a day after the National Council of Arab Mayors declared a general strike of municipal and council services, in protest of the "collapse of the Arab local authorities due to the Corona crisis". The demonstrators also declared they would keep their schools closed until the government releases funds because they are unable to prepare schools to operate under the Ministry of Health guidelines issued to fight Coronavirus.

One week after the protests in Jerusalem, hundreds of Druze and Circassian citizens demonstrated in Tel Aviv outside the Government Complex Building (Kiryat Hamemshalah) in a separate, but related protest. The heads of the 16 Druze and Circassian communities demanded the government correct long-standing discrimination, as well as fulfill its promises to the communities. They also expressed their frustration over the fact that they cannot provide their residents with basic amenities like schools, roads, parking lots, community centers, and public parks.

The protesters carried Israeli and the Druze community's flags, and signs with slogans directed at Netanyahu, which read, “You took my honor, you betrayed me”, “brothers don’t betray brothers”, and “we don’t have a job, you betrayed us”. Hamoud declared in this protest: "We are going to war, not to a protest. Just like we fight for this country, we will fight for our rights, all the people of Israel are with us”. 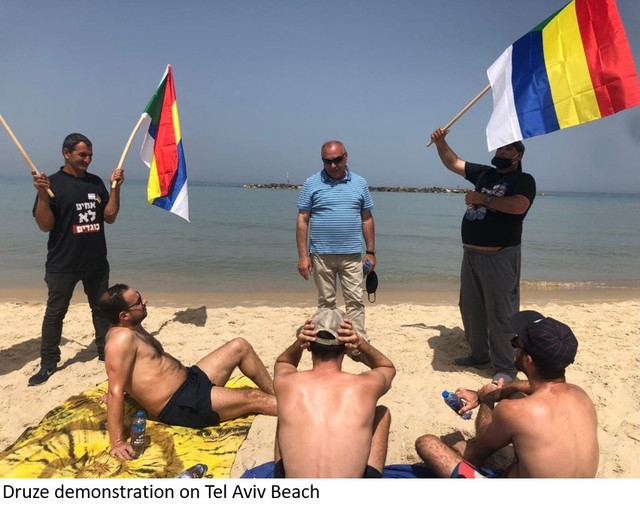 A day after the Tel Aviv demonstration, Druze and Circassian leaders met with President Reuven Rivlin who called on the government not to ignore their demands (Hebrew). On Sunday, May 17, ahead of the inauguration of the new government, Druze and Circassian protestors hung signs in Jerusalem that read "False inauguration – brothers do not betray!" (Hebrew). During the last two weeks of May, other demonstrations took place as part of this protest, including on Tel Aviv beaches and the entrance to the Finance Ministry in Jerusalem (Arabic). During the demonstration on the Tel Aviv beach, protest leaders met Tel Aviv Mayor Ron Huldai, who later tweeted: “I support the Druze and Circassian struggle with all my heart. The Israeli government promised to transfer budgets, but as usual - did not promise to fulfill. The Druze and the Circassians are citizens of equal rights, and it is time for the state to see them as such (Hebrew)”. 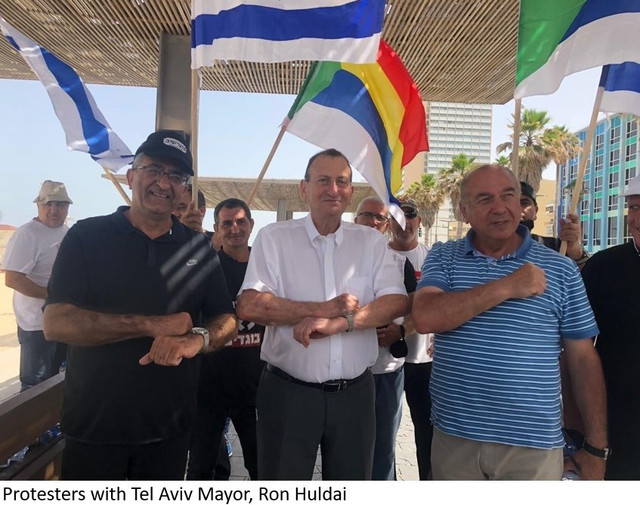 Finally, on the last day of May, hundreds of Druze and Circassians protested marched in Jerusalem's government complex and gathered outside the Foreign Ministry building, where the Cabinet held its first meeting of the week. Again, the participants demanded the allocation of the promised funds to their regional councils and to repel the Kaminitz and nation-state laws. During the demonstration, some of the protesters tied themselves to the fence outside the Ministry in an attempt to prevent the ministers from entering the cabinet meeting.

At the beginning of June, the Israeli government responded to the protesters' demands. On June 1, Finance Minister Israel Katz and his Deputy, Fateen Mulla, met with the Druze community leader, Shaykh Mowafaq Tarf, as well as other leaders of this community. On the same day, Prime Minister Netanyahu’s office announced that he has agreed with Druze leaders to accelerate the transfer of NIS 200 million and to push a multi-year plan to budget money for the Druze and Circassian communities: “The PMO, the treasury and regional cooperation ministry will immediately begin to put together a five-year plan to bolster and develop Druze and Circassian towns.”

The Prime Minister's announcement was accompanied by the Interior Minister's promise to immediately transfer NIS 20 million to the Druze authorities, due to the decline in their coverage of the Corona crisis. But Jaber announced on June 4 that despite these developments, the protest will continue. He claimed there is a shortage of about 35,000 housing units in the Druze and Circassian society, and therefore the government needs to promote detailed construction plans and stop enforcing the demolition of illegal constructions until the approval of such plans.